Although shrublands, savannas and grasslands account for 37% of the world’s terrestrial area, not many studies have analysed the role of these ecosystems in the global carbon cycle at a regional scale. The MODIS Gross Primary Production (GPP) product is used here to help bridge this gap. In this study, the agreement between the MODIS GPP product (GPPm) and the GPP Eddy Covariance tower data (GPPec) was tested for six different sites in temperate and dry climatic regions (three grasslands, two shrublands and one evergreen forest). Results of this study show that for the non-forest sites in water-limited areas, GPPm is well correlated with GPPec at annual scales (r2 = 0.77, n = 12; SEE = 149.26 g C∙m−2∙year−1), although it tends to overestimate GPP and it is less accurate in the sites with permanent water restrictions. The use of biome-specific models based on precipitation measurements at a finer spatial resolution than the Data Assimilation Office (DAO) values can increase the accuracy of these estimations. The seasonal dynamics and the beginning and end of the growing season were well captured by GPPm for the sites where (i) the productivity was low throughout the year or (ii) the changes in the flux trend were abrupt, usually due to the restrictions in water availability. The agreement between GPPec and GPPm in non-forested sites was lower on a weekly basis than at an annual scale (0.44 ≤ r2 ≤ 0.49), but these results were improved by including meteorological data at a finer spatial scale, and soil water content and temperature measurements in the model developed to predict GPPec (0.52 ≤ r2 ≤ 0.65). View Full-Text
Keywords: grasslands; shrublands; carbon; water limited; Eddy covariance; remote sensing grasslands; shrublands; carbon; water limited; Eddy covariance; remote sensing
►▼ Show Figures 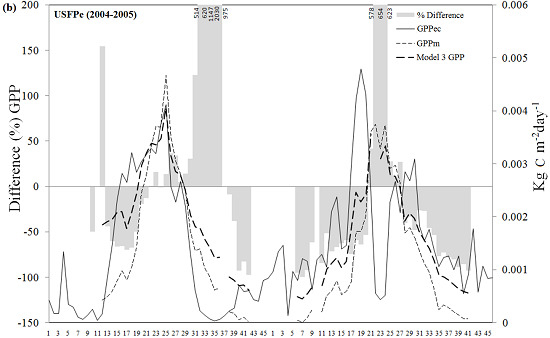