Contraction of the Gobi Desert, 2000–2012
Previous Article in Journal

The aim of this paper is to investigate how optical and Synthetic Aperture Radar (SAR) data can be combined in an integrated multi-source framework to identify burned areas at the regional scale. The proposed approach is based on the use of fuzzy sets theory and a region-growing algorithm. Landsat TM and (C-band) ENVISAT Advanced Synthetic Aperture Radar (ASAR) images acquired for the year 2003 have been processed to extract burned area maps over Portugal. Pre-post fire SAR backscatter temporal difference has been integrated with optical spectral indices to the aim of reducing confusion between burned areas and low-albedo surfaces. The output fuzzy score maps have been compared with reference fire perimeters provided by the Fire Atlas of Portugal. Results show that commission and omission errors in the output burned area maps are a function of the threshold applied to the fuzzy score maps; between the two extremes of the greatest producer’s accuracy (omission error < 10%) and user’s accuracy (commission error < 5%), an intermediate threshold value provides errors of about 20% over the study area. The integration of SAR backscatter allowed reducing local commission errors from 65.4% (using optical data, only) to 11.4%, showing to significantly mitigate local errors due to the presence of cloud shadows and wetland areas. Overall, the proposed method is flexible and open to further developments; also in the perspective of the European Space Agency (ESA) Sentinel missions operationally providing SAR and optical datasets. View Full-Text
Keywords: Landsat TM; Synthetic Aperture Radar (SAR); fuzzy sets theory; fire monitoring; burned area mapping Landsat TM; Synthetic Aperture Radar (SAR); fuzzy sets theory; fire monitoring; burned area mapping
►▼ Show Figures 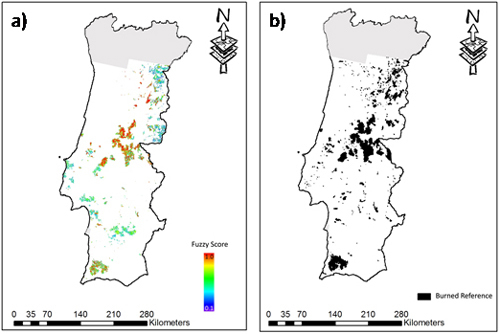