Magma Pathways and Their Interactions Inferred from InSAR and Stress Modeling at Nyamulagira Volcano, D.R. Congo

Okmok, a ~10-km wide caldera that occupies most of the northeastern end of Umnak Island, is one of the most active volcanoes in the Aleutian arc. The most recent eruption at Okmok during July–August 2008 was by far its largest and most explosive since at least the early 19th century. We investigate post-eruptive magma supply and storage at the volcano during 2008–2014 by analyzing all available synthetic aperture radar (SAR) images of Okmok acquired during that time period using the multi-temporal InSAR technique. Data from the C-band Envisat and X-band TerraSAR-X satellites indicate that Okmok started inflating very soon after the end of 2008 eruption at a time-variable rate of 48–130 mm/y, consistent with GPS measurements. The “model-assisted” phase unwrapping method is applied to improve the phase unwrapping operation for long temporal baseline pairs. The InSAR time-series is used as input for deformation source modeling, which suggests magma accumulating at variable rates in a shallow storage zone at ~3.9 km below sea level beneath the summit caldera, consistent with previous studies. The modeled volume accumulation in the six years following the 2008 eruption is ~75% of the 1997 eruption volume and ~25% of the 2008 eruption volume. View Full-Text
Keywords: Okmok; InSAR; multi-temporal InSAR; phase unwrapping; Mogi; geodesy; modeling Okmok; InSAR; multi-temporal InSAR; phase unwrapping; Mogi; geodesy; modeling
►▼ Show Figures 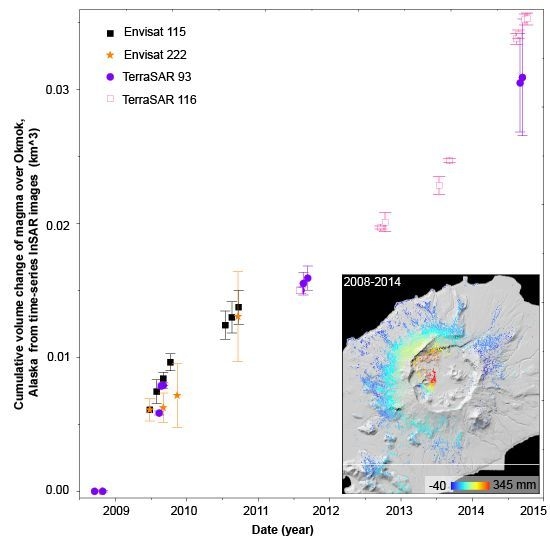