Time series of remotely sensed data are an important source of information for understanding land cover dynamics. In particular, the fraction of absorbed photosynthetic active radiation (fAPAR) is a key variable in the assessment of vegetation primary production over time. However, the fAPAR series derived from polar orbit satellites are not continuous and consistent in space and time. Filtering methods are thus required to fill in gaps and produce high-quality time series. This study proposes an adapted (iteratively reweighted) local regression filter (LOESS) and performs a benchmarking intercomparison with four popular and generally applicable smoothing methods: Double Logistic (DLOG), smoothing spline (SSP), Interpolation for Data Reconstruction (IDR) and adaptive Savitzky-Golay (ASG). This paper evaluates the main advantages and drawbacks of the considered techniques. The results have shown that ASG and the adapted LOESS perform better in recovering fAPAR time series over multiple controlled noisy scenarios. Both methods can robustly reconstruct the fAPAR trajectories, reducing the noise up to 80% in the worst simulation scenario, which might be attributed to the quality control (QC) MODIS information incorporated into these filtering algorithms, their flexibility and adaptation to the upper envelope. The adapted LOESS is particularly resistant to outliers. This method clearly outperforms the other considered methods to deal with the high presence of gaps and noise in satellite data records. The low RMSE and biases obtained with the LOESS method (|rMBE| < 8%; rRMSE < 20%) reveals an optimal reconstruction even in most extreme situations with long seasonal gaps. An example of application of the LOESS method to fill in invalid values in real MODIS images presenting persistent cloud and snow coverage is also shown. The LOESS approach is recommended in most remote sensing applications, such as gap-filling, cloud-replacement, and observing temporal dynamics in situ where rapid seasonal changes are produced. View Full-Text
Keywords: fAPAR; noise; MODIS; time series; filtering; interpolation; LOESS fAPAR; noise; MODIS; time series; filtering; interpolation; LOESS
►▼ Show Figures 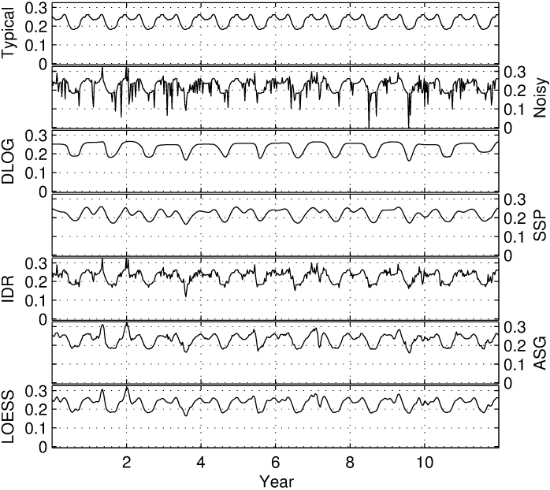