Persistent Scatterer Interferometry (PSI) has been widely used for landslide studies in recent years. This paper investigated the spatial patterns of PSI point targets and landslide occurrences in the Arno River basin in Central Italy. The main purpose is to analyze whether spatial patterns of Persistent Scatterers (PS) can be recognized as indicators of landslide occurrences throughout the whole basin. The bivariate K-function was employed to assess spatial relationships between PS and landslides. The PSI point targets were acquired from almost 4 years (from March 2003 to January 2007) of RADARSAT-1 images. The landslide inventory was collected from 15 years (from 1992–2007) of surveying and mapping data, mainly including remote sensing data, topographic maps and field investigations. The proposed approach is able to assess spatial patterns between a variety of PS and landslides, in particular, to understand if PSI point targets are spatially clustered (spatial attraction) or randomly distributed (spatial independency) on various types of landslides across the basin. Additionally, the degree and scale distances of PS clustering on a variety of landslides can be characterized. The results rejected the null hypothesis that PSI point targets appear to cluster similarly on four types of landslides (slides, flows, falls and creeps) in the Arno River basin. Significant influence of PS velocities and acquisition orbits can be noticed on detecting landslides with different states of activities. Despite that the assessment may be influenced by the quality of landslide inventory and Synthetic Aperture Radar (SAR) images, the proposed approach is expected to provide guidelines for studies trying to detect and investigate landslide occurrences at a regional scale through spatial statistical analysis of PS, for which an advanced understanding of the impact of scale distances on landslide clustering is fundamentally needed. View Full-Text
Keywords: Persistent Scatterer Interferometry; landslide; spatial pattern; bivariate K-function; Arno River basin Persistent Scatterer Interferometry; landslide; spatial pattern; bivariate K-function; Arno River basin
►▼ Show Figures 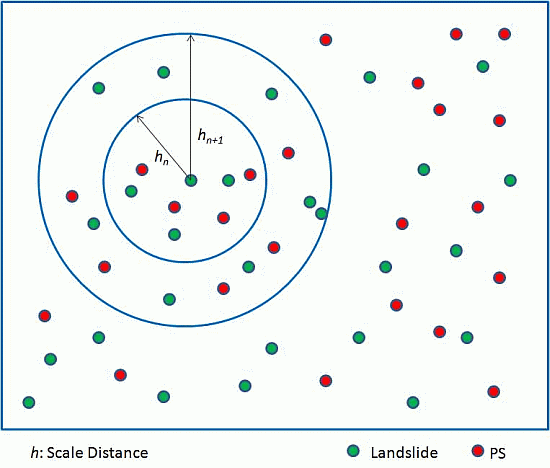