Evapotranspiration Variability and Its Association with Vegetation Dynamics in the Nile Basin, 2002–2011
Previous Article in Journal

Monitoring of Irrigation Schemes by Remote Sensing: Phenology versus Retrieval of Biophysical Variables

The appraisal of crop water requirements (CWR) is crucial for the management of water resources, especially in arid and semi-arid regions where irrigation represents the largest consumer of water, such as the Doukkala area, western Morocco. Simple and (semi) empirical approaches have been applied to estimate CWR: the first one is called Kc-NDVI method, based on the correlation between the Normalized Difference Vegetation Index (NDVI) and the crop coefficient (Kc); the second one is the analytical approach based on the direct application of the Penman-Monteith equation with reflectance-based estimates of canopy biophysical variables, such as surface albedo (r), leaf area index (LAI) and crop height (hc). A time series of high spatial resolution RapidEye (REIS), SPOT4 (HRVIR1) and Landsat 8 (OLI) images acquired during the 2012/2013 agricultural season has been used to assess the spatial and temporal variability of crop evapotranspiration ETc and biophysical variables. The validation using the dual crop coefficient approach (Kcb) showed that the satellite-based estimates of daily ETc were in good agreement with ground-based ETc, i.e., R2 = 0.75 and RMSE = 0.79 versus R2 = 0.73 and RMSE = 0.89 for the Kc-NDVI, respective of the analytical approach. The assessment of irrigation performance in terms of adequacy between water requirements and allocations showed that CWR were much larger than allocated surface water for the entire area, with this difference being small at the beginning of the growing season. Even smaller differences were observed between surface water allocations and Irrigation Water Requirements (IWR) throughout the irrigation season. Finally, surface water allocations were rather close to Net Irrigation Water Requirements (NIWR). View Full-Text
Keywords: remote sensing; crop water requirements; irrigation performance; semi-arid climate; biophysical variables remote sensing; crop water requirements; irrigation performance; semi-arid climate; biophysical variables
►▼ Show Figures 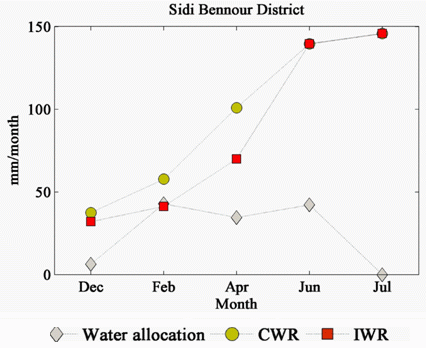