Length of Growing Period over Africa: Variability and Trends from 30 Years of NDVI Time Series

Vegetation belongs to the components of the Earth surface, which are most extensively studied using historic and present satellite records. Recently, these records exceeded a 30-year time span composed of preprocessed fortnightly observations (1981–2011). The existence of monotonic changes and trend shifts present in such records has previously been demonstrated. However, information on timing and type of such trend shifts was lacking at global scale. In this work, we detected major shifts in vegetation activity trends and their associated type (either interruptions or reversals) and timing. It appeared that the biospheric trend shifts have, over time, increased in frequency, confirming recent findings of increased turnover rates in vegetated areas. Signs of greening-to-browning reversals around the millennium transition were found in many regions (Patagonia, the Sahel, northern Kazakhstan, among others), as well as negative interruptions—“setbacks”—in greening trends (southern Africa, India, Asia Minor, among others). A minority (26%) of all significant trends appeared monotonic. View Full-Text
Keywords: GIMMS v3G; vegetation activity; trend shifts; greening-to-browning reversal GIMMS v3G; vegetation activity; trend shifts; greening-to-browning reversal
►▼ Show Figures 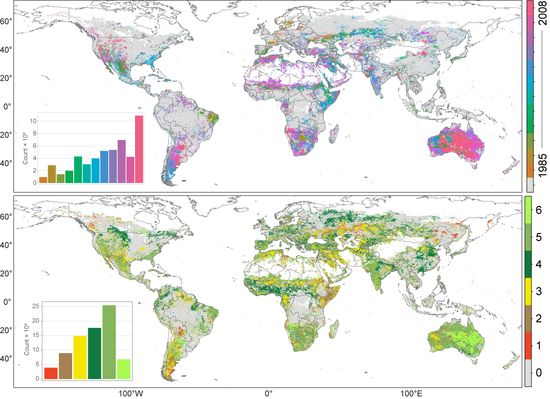