In this study we use visible, short-wave infrared and thermal Advanced Spaceborne Thermal Emission and Reflection Radiometer (ASTER) data validated with high-resolution Quickbird (QB) and Worldview2 (WV2) for mapping debris cover in the eastern Himalaya using two independent approaches: (a) a decision tree algorithm, and (b) texture analysis. The decision tree algorithm was based on multi-spectral and topographic variables, such as band ratios, surface reflectance, kinetic temperature from ASTER bands 10 and 12, slope angle, and elevation. The decision tree algorithm resulted in 64 km2 classified as debris-covered ice, which represents 11% of the glacierized area. Overall, for ten glacier tongues in the Kangchenjunga area, there was an area difference of 16.2 km2 (25%) between the ASTER and the QB areas, with mapping errors mainly due to clouds and shadows. Texture analysis techniques included co-occurrence measures, geostatistics and filtering in spatial/frequency domain. Debris cover had the highest variance of all terrain classes, highest entropy and lowest homogeneity compared to the other classes, for example a mean variance of 15.27 compared to 0 for clouds and 0.06 for clean ice. Results of the texture image for debris-covered areas were comparable with those from the decision tree algorithm, with 8% area difference between the two techniques. View Full-Text
Keywords: optical remote sensing; multi-spectral; ASTER; debris-covered glaciers; Sikkim Himalaya optical remote sensing; multi-spectral; ASTER; debris-covered glaciers; Sikkim Himalaya
►▼ Show Figures 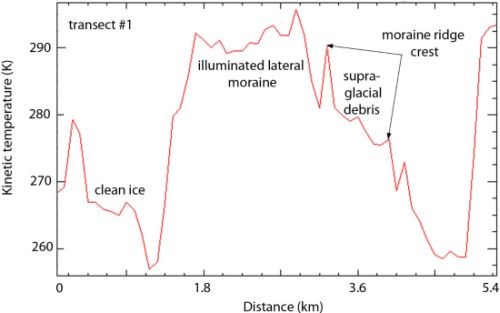