Time-of-Flight (ToF) technologies are developed mainly for range estimations in industrial applications or consumer products. Recently, it was realized that ToF sensors could also be used for the detection of fluorescence and of the minute changes in the nanosecond-lived electronic states of fluorescent molecules. This capability can be exploited to report on the biochemical processes occurring within living organisms. ToF technologies, therefore, provide new opportunities in molecular and cell biology, diagnostics, and drug discovery. In this short communication, the convergence of the engineering and biomedical communities onto ToF technologies and its potential impact on basic, applied and translational sciences are discussed.
Keywords: Time-of-Flight (ToF); fluorescence lifetime; microscopy Time-of-Flight (ToF); fluorescence lifetime; microscopy

It was the summer of 2005 when in the laboratory of Fred Wouters we started the first autonomous runs of our new in-house developed high throughput fluorescence lifetime imaging (FLIM) system. However successful that development was, one key element in allowing the biomedical community to benefit from FLIM systems, to enable the screening technologies we were pioneering [1] and to get closer to the routine application of FLIM, was still missing: replacing the expensive, comparatively fragile, and not very user-friendly, multi-channel plates used in FLIM with better technologies. The basic idea was to find a silicon-based detector capable of demodulating fluorescence signals on a bi-dimensional array of pixels. Frequent searches of primary literature returned only a few, though interesting, papers including: Nishikata et al. [2] on the development of a dedicated lock-in imager in CCD technology and, Mitchell et al. [3,4] on the adaptation of conventional CCD cameras to achieve demodulation. Unfortunately, ad hoc technologies for lock-in imaging appeared to be operating at modulation frequencies too low to be useful for FLIM [5,6] and the available CCD technologies required modifications to the camera electronics of systems which would not operate at an ideal frequency range for FLIM.
After a long literature and patent review for “lock-in imagers”, we became aware of the existence of Time-of-Flight (ToF) based technologies developed for other scopes: solid-state smart pixels were developed to replace multi channel plate- or LiDAR-based technologies to quantify the distance of objects by measuring the travelling time of a pulse of light from and to the detector/light-source. A camera that measures meter ranges with centimetre precision using the speed of light as a ruler is capable of measuring nanosecond times with tens or hundreds of picoseconds precision, exactly what we do routinely in fluorescence lifetime sensing. Soon after, we flew to Zurich to secure an agreement with Centre Suisse d’Electronique et de Microtechnique to acquire one of their prototypes. Within a year, we generated the first FLIM image using ToF technology, and the first image with an all solid state system (source and detector) within a frequency range relevant to biology [7,8].
Currently, ToF technologies are often developed also for fluorescence and fluorescence lifetime detection [9–15]. It is apparent that the engineering and biomedical communities may benefit from each other, and we are seeding new technologies and applications that could have significant impact on basic sciences and health care in the medium term.

3. A Vision for the Future

Silicon-based FLIM cameras derived from ToF technologies may outperform tube-based detectors (photo-multiplier tubes (PMTs) and multi channel plates) within the next 5 to 10 years. In recent years, Hybrid PMT detectors have been adopted at a fast pace in fluorescence microscopy. These detectors provide high quantum efficiencies (∼40%) in the visible range thanks to GaAsP photocathodes with optimal timing specifications (∼100 ps instrument response function, no after pulsing and 10MHz maximum count rate). These specifications are hard to meet, but ToF technologies may be used to generate clusters of pixels equipped with on-chip FLIM capabilities to provide a large sensitive area (in the order of millimeters) and very high count rates (in the order of gigahertz) [11]. This will be possible if fill factor and quantum efficiencies can permit detection probability in excess of 40–50% therefore resulting in very fast, sensitive detectors capable of being integrated in microscopy setups without the use of expensive specialist electronics. However, the most competitive applications for ToF technologies are probably the replacement of multi-anode PMTs and multi channel plates. These technologies provide only low quantum efficiencies (∼10%) and, often, limited maximum count rates (∼1 MHz). Linear arrays of silicon-based lifetime-sensitive pixels are likely to outperform sensors that can be used in spectrographs or line scanning microscopes. Two-dimensional arrays could easily replace multi-channel plates used for wide-field FLIM detection. An ideal system would provide quantum efficiencies in excess of 50% (fill factor effects included) on the visible range (400–700 nm), with dead times lower than 100 ns, on pixel sizes of 10–20 μm. In order to enable scientific applications, we envisage that linear arrays should provide 64 pixels and two-dimensional arrays should have at least 256 × 256 pixels. To be commercially viable, probably these values should reach 128–256 and 512 × 512 pixels, respectively.
When integrated with inexpensive light sources such as light emitting diodes or laser diodes, these systems will provide extremely cost-effective and user-friendly tools. For instance, wide-field real-time FLIM could be available as an add-on for standard fluorescence microscopes [8,32], but the technology may benefit from flow and image cytometry application to industrials such as automated product inspection. Moreover, the most recent developments in analysis techniques, aimed at the simplification of data analysis and interpretation, properly tailored to the requirements of the biomedical user, could also permit a deeper penetration of these technologies [31]. However, ToF technologies and new camera systems equipped with “smart pixels” may not be just an alternative to current FLIM technologies.
Recently, high content imaging has begun to impact the scientific community. Automated microscopes are used to characterize complex biological processes with high throughput capabilities [1,37]. This enables the screening of large libraries of genes and molecules. The robustness and inherent standardization of FRET assays may significantly benefit these research programs. Automated microscopy already benefits basic research, target identification programs and validation of lead compounds using cell based assays. Furthermore, it is likely that many toxicity assays and other tests for drug candidates will gradually move from clinical trials to cell based assays in order to reduce the high attrition rates during the last phases of drug discovery, often caused by toxicity and inefficacy of the candidate compounds [38].
Among the translational applications of biophysical imaging modalities that ToF can support, there is also diagnostics. Many laboratories have demonstrated the increased contrast that fluorescence lifetime imaging and other techniques can provide, for instance, for tumour diagnostics [39,40]. Discrimination of pathological versus healthy tissue, by detection of the natural fluorescence of tissue or by novel fluorescent markers will be useful for histopathology, guided biopsies, endoscopy and fluorescence assisted operations.
In our laboratories, we are developing microscopes capable of multiplexing the many properties of light. Detection of polarization and spectral information can be achieved with the use of optics [41], but the timing properties of light require pico/nano-second sensitive pixels [11]. The integration of smart pixels and dedicated optics can provide an extremely versatile optical detector that can be reconfigured on-pixel to detect the features of biological interest. With these new sophisticated tools capable of classifying the optical signatures of biochemical processes, we will be able to implement effective tools for multiplexing biochemical reactions or classifying pathological signatures within healthy tissue.
With the appropriate resources invested in the development of the next generation ToF technologies dedicated to fluorescence detection, it will be possible not just to provide better FLIM systems, but also to lay down the first milestone for the development of radically novel detection systems that could impact significantly on the biomedical community and the health care system.

The author would like to acknowledge funding from EPSRC (Grant EP/F044011), Ashok Venkitaraman for his invaluable support at the Hutchison/MRC Research Centre and Lorraine Barber for editing the manuscript. 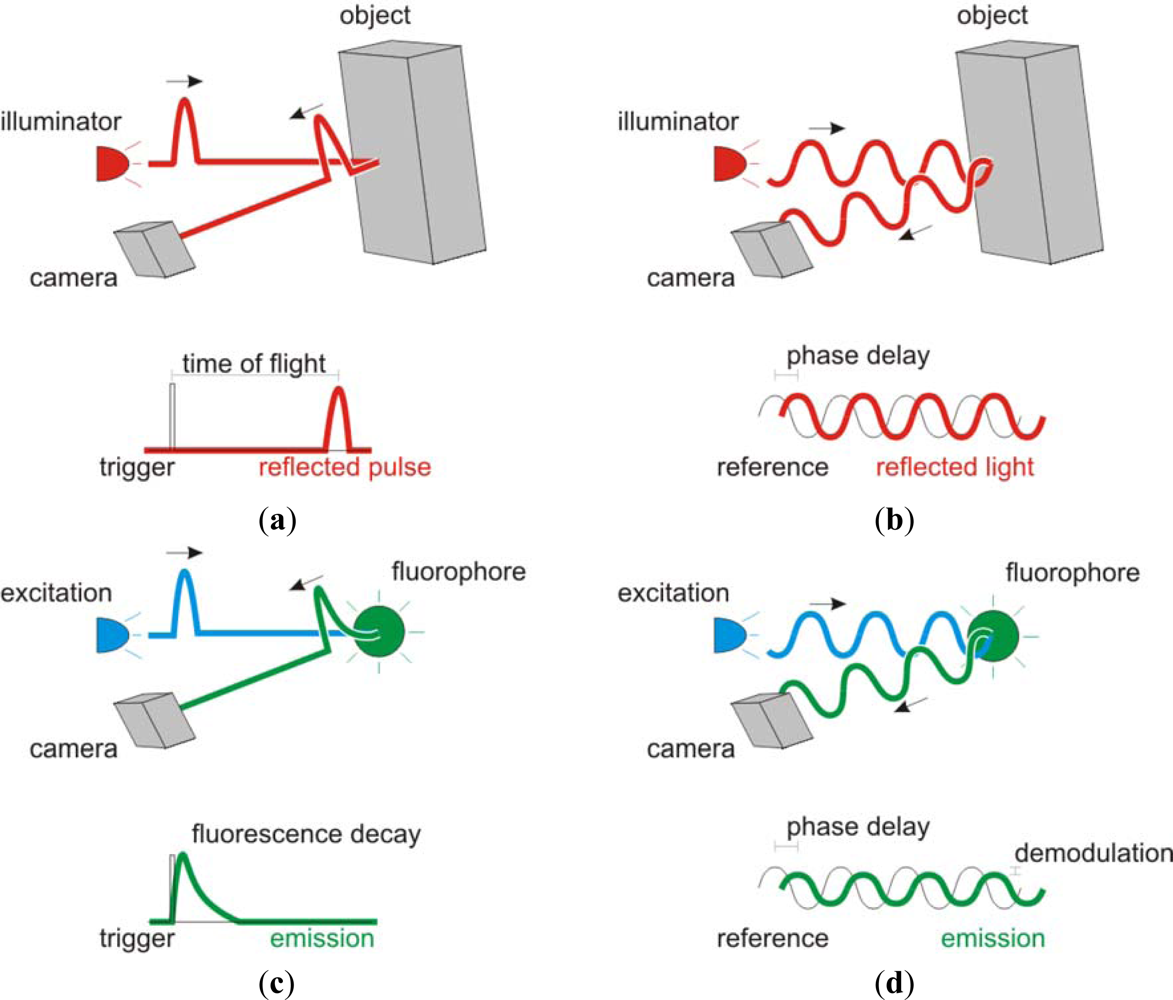