Conventional discrete return airborne lidar systems, used in the commercial sector for efficient generation of high quality spatial data, have been considered for the past decade to be an ideal choice for various mapping applications. Unlike two-dimensional aerial imagery, the elevation component of airborne lidar data provides the ability to represent vertical structure details with very high precision, which is an advantage for many lidar applications focusing on the analysis of elevated features such as 3D vegetation mapping. However, the use of conventional airborne discrete return lidar systems for some of these applications has often been limited, mostly due to relatively coarse vertical resolution and insufficient number of multiple measurements in vertical domain. For this reason, full waveform airborne sensors providing more detailed representation of target vertical structure have often been considered as a preferable choice in some areas of 3D vegetation mapping application, such as forestry research. This paper presents an overview of the specific features of airborne lidar technology concerning 3D mapping applications, particularly vegetation mapping. Certain key performance characteristics of lidar sensors important for the quality of vegetation mapping are discussed and illustrated by the advanced capabilities of the ALTM-Orion, a new discrete return sensor manufactured by Optech Incorporated. It is demonstrated that advanced discrete return sensors with enhanced 3D mapping capabilities can produce data of enhanced quality, which can represent complex structures of vegetation targets at the level of details equivalent in some aspects to the content of full waveform data. It is also shown that recent advances in conventional airborne lidar technology bear the potential to create a new application niche, where high quality dense point clouds, enhanced by fully recorded intensity for multiple returns, may provide sufficient information for modeling and analysis, which have traditionally been applied mostly to full waveform data. View Full-Text
Keywords: lidar; airborne; discrete returns; full waveform; 3D vegetation mapping lidar; airborne; discrete returns; full waveform; 3D vegetation mapping
►▼ Show Figures 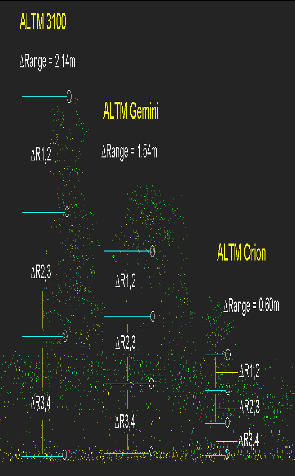