A Comparison of Spectral Bin Microphysics versus Bulk Parameterization in Forecasting Typhoon In-Fa (2021) before, during, and after Its Landfall
Previous Article in Special Issue

Shifted to the South, Shifted to the North, but No Expansion: Potential Suitable Habitat Distribution Shift and Conservation Gap of the Critically Endangered Baer’s Pochard (Aythya baeri)

There are many challenges in biodiversity conservation, especially for migratory waterbirds because their survival depends on the availability of a suite of interconnected sites at different stages of their annual cycle. Due to habitat loss and degradation, the population of Baer’s Pochard (Aythya baeri), a migratory diving-duck, has declined to an extent that it has been listed as a critically endangered species by the IUCN Red List. To better understand the habitat requirements of this threatened waterbird for its effective conservation, we conducted seven years of field surveys within its historical distribution range in the East Asian–Australasian Flyway including China and neighbouring countries, covering 563 observation sites at 185 locations. Twelve new locations were identified as habitats for this species. By combining our surveys with literature and citizen science birding records, 171 Baer’s Pochard’s presence sites have classified as migratory stopovers, wintering grounds and breeding and potential breeding habitats. We then used Maxent model to estimate the potential distribution range and updated and refined the current IUCN distribution map. Finally, we identified the key conservation gaps by overlaying the distribution with a recent remotely acquired global landcover map. Our results show that: (1) The southernmost breeding site is about 1400 km south of its current IUCN breeding range; (2) the northern most wintering site is 800 km north of the IUCN wintering range; (3) Six newly discovered sites in Hebei, Henan, Shandong, Jiangxi and Hubei provinces, China are confirmed to be used all year round; (4) Most sites (81.8%) are not located in protected areas (PAs), and the majority of the suitable habitats (90%) are not protected by the current PA network. Our findings reveal that great changes have taken place in the distribution of Baer’s Pochard and that there are many distribution overlaps throughout its annual migration circle (e.g., many historical stopover sites become breeding habitats). Moreover, the key habitats have retreated into eastern Asia, and most of the habitats overlap with urban developed areas and are outside of current PA network. Our study suggests that the existing PA network may be less effective for the conservation of this critically endangered species under predicted global climate change, and other effective area-based conservation measures should be part of the conservation strategy. More importantly, as the distribution of Baer’s Pochard covers at least 15 countries, closely coordinated cross-border cooperation would be critical for its future survival. View Full-Text
Keywords: species distribution models; distribution shift; conservation gap; East Asian-Australasian flyway species distribution models; distribution shift; conservation gap; East Asian-Australasian flyway
►▼ Show Figures 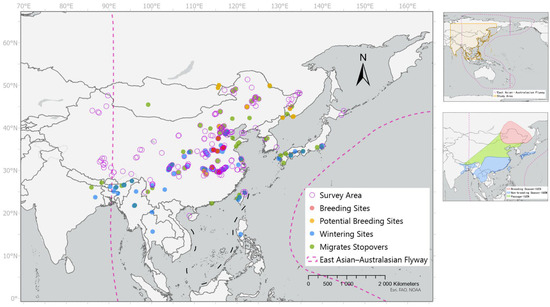