SIF-Based GPP Is a Useful Index for Assessing Impacts of Drought on Vegetation: An Example of a Mega-Drought in Yunnan Province, China
Next Article in Special Issue

Glacier Recession in the Altai Mountains after the LIA Maximum

The study aims to reconstruct the Altai glaciers at the maximum of the LIA, to estimate the reduction of the Altai glaciers from the LIA maximum to the present, and to analyze glacier reduction rates on the example of the Tavan Bogd mountain range. Research was based on remote sensing and field data. The recent glaciation in the southern part of the Altai is estimated (1256 glaciers with the total area of 559.15 ± 31.13 km2), the area of the glaciers of the whole Altai mountains is estimated at 1096.55 km2. In the southern part of Altai, 2276 glaciers with a total area of 1348.43 ± 56.16 km2 were reconstructed, and the first estimate of the LIA glacial area for the entire Altai mountain system was given (2288.04 km2). Since the LIA, the glaciers decrease by 59% in the southern part of Altai and by 47.9% for the whole Altai. The average increase in ELA in the southern part of Altai was 106 m. The larger increase of ELA in the relatively humid areas was probably caused by a decrease in precipitation. Glaciers in the Tavan Bogd glacial center degraded with higher rates after 1968 relative to the interval between 1850–1968. One of the intervals of fast glacier shrinkage in 2000–2010 was caused by a dry and warm interval between 1989 and 2004. However, the fast decrease in glaciers in 2000–2010 was mainly caused by the shrinkage or disappearance of the smaller glaciers, and large valley glaciers started a fast retreat after 2010. The study results present the first evaluation of the glacier recession of the entire Altai after the LIA maximum. View Full-Text
Keywords: glaciers; Little Ice Age; reconstruction; retreat; Altai glaciers; Little Ice Age; reconstruction; retreat; Altai
►▼ Show Figures 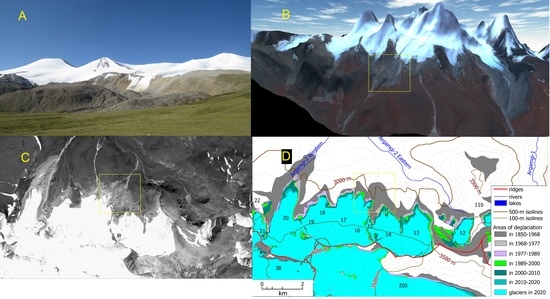