Basemap and Planet Fusion—derived from PlanetScope imagery—represent the next generation of analysis ready datasets that minimize the effects of the presence of clouds. These datasets have high spatial (3 m) and temporal (daily) resolution, which provides an unprecedented opportunity to improve the monitoring of on-farm reservoirs (OFRs)—small water bodies that store freshwater and play important role in surface hydrology and global irrigation activities. In this study, we assessed the usefulness of both datasets to monitor sub-weekly surface area changes of 340 OFRs in eastern Arkansas, USA, and we evaluated the datasets main differences when used to monitor OFRs. When comparing the OFRs surface area derived from Basemap and Planet Fusion to an independent validation dataset, both datasets had high agreement (r2 ≥ 0.87), and small uncertainties, with a mean absolute percent error (MAPE) between 7.05% and 10.08%. Pairwise surface area comparisons between the two datasets and the PlanetScope imagery showed that 61% of the OFRs had r2 ≥ 0.55, and 70% of the OFRs had MAPE <5%. In general, both datasets can be employed to monitor OFRs sub-weekly surface area changes, and Basemap had higher surface area variability and was more susceptible to the presence of cloud shadows and haze when compared to Planet Fusion, which had a smoother time series with less variability and fewer abrupt changes throughout the year. The uncertainties in surface area classification decreased as the OFRs increased in size. In addition, the surface area time series can have high variability, depending on the OFR environmental conditions (e.g., presence of vegetation inside the OFR). Our findings suggest that both datasets can be used to monitor OFRs sub-weekly, seasonal, and inter-annual surface area changes; therefore, these datasets can help improve freshwater management by allowing better assessment and management of the OFRs. View Full-Text
Keywords: analysis ready datasets; PlanetScope; Basemap; Planet Fusion; on-farm reservoirs; water management analysis ready datasets; PlanetScope; Basemap; Planet Fusion; on-farm reservoirs; water management
►▼ Show Figures 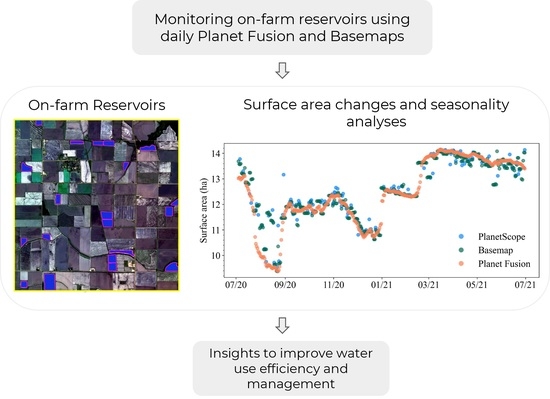 Samapriya Roy
Dr. Roy is a Customer and Researcher Engagement & Senior Solutions Engineer at Planet Labs. Dr. Roy’s work involves big data analysis and large-scale data science applications utilizing geospatial technology. He works with different imagery types and is currently interested in time-series data and analysis of natural systems, coupled with system modeling and periodicity. Most of his work includes, but is not limited to, remote sensing applications, large-scale data processing and management, and API support, along with network analysis and geostatistical methods.

Michele Reba
https://www.ars.usda.gov/people-locations/projects/?person-id=51546
Zoom | Orient | As Lines | As Sticks | As Cartoon | As Surface | Previous Scene | Next Scene
We use cookies on our website to ensure you get the best experience. Read more about our cookies here.
Accept
We have just recently launched a new version of our website. Help us to further improve by taking part in this short 5 minute survey here. here.
Never show this again