Toward a Novel Laser-Based Approach for Estimating Snow Interception

The Advanced Technology Microwave Sounder (ATMS) mounted on the Suomi National Polar-Orbiting Partnership (NPP) satellite can provide both temperature and humidity information for a weather prediction model. Based on the rapid-refresh multi-scale analysis and prediction system—short-term (RMAPS-ST), we investigated the impact of ATMS radiance data assimilation on strong rainfall forecasts. Two groups of experiments were conducted to forecast heavy precipitation over North China between 18 July and 20 July 2016. The initial conditions and forecast results from the two groups of experiments have been compared and evaluated against observations. In comparison with the first group of experiments that only assimilated conventional observations, some added value can be obtained for the initial conditions of temperature, humidity, and wind fields after assimilating ATMS radiance observations in the system. For the forecast results with the assimilation of ATMS radiances, the score skills of quantitative forecast rainfall have been improved when verified against the observed rainfall. The Heidke skill score (HSS) skills of 6-h accumulated precipitation in the 24-h forecasts were overall increased, more prominently so for the heavy rainfall above 25 mm in the 0–6 h of forecasts. Assimilating ATMS radiance data reduced the false alarm ratio of quantitative precipitation forecasting in the 0–12 h of the forecast range and thus improved the threat scores for the heavy rainfall storm. Furthermore, the assimilation of ATMS radiances improved the spatial distribution of hourly rainfall forecast with observations compared with that of the first group of experiments, and the mean absolute error was reduced in the 10-h lead time of forecasts. The inclusion of ATMS radiances provided more information for the vertical structure of features in the temperature and moisture profiles, which had an indirect positive impact on the forecasts of the heavy rainfall in the RMAPS-ST system. However, the deviation in the location of the heavy rainfall center requires future work. View Full-Text
Keywords: Advanced Technology Microwave Sounder (ATMS); radiance assimilation; heavy rainfall; rapid-refresh multi-scale analysis and prediction system—short-term (RMAPS-ST) Advanced Technology Microwave Sounder (ATMS); radiance assimilation; heavy rainfall; rapid-refresh multi-scale analysis and prediction system—short-term (RMAPS-ST)
►▼ Show Figures 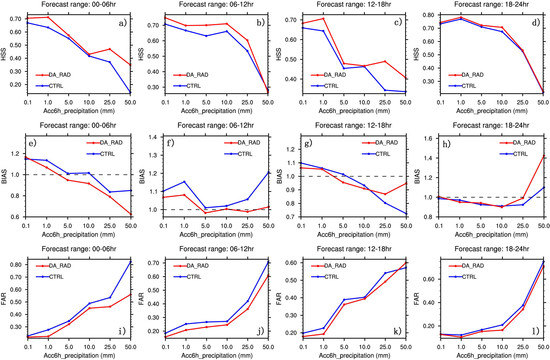