Ice Concentration Retrieval from the Analysis of Microwaves: A New Methodology Designed for the Copernicus Imaging Microwave Radiometer

This study is devoted to a generalization of C-band Radarsat-2 and X-band TerraSAR-X synthetic aperture radar (SAR) data in the form of a diagram serving to easily identify mineral oil slicks (crude oil and emulsions) and separate them from the other oil slicks. The diagram is based on the multi-polarization parameter called Resonant to Non-resonant signal Damping (RND) introduced by Ivonin et al. in 2016, which is related to the ratio between damping within the slick of the short waves and wave breakings. SAR images acquired in the North Sea during oil-on-water exercises in 2011–2012 containing three types of oil spills (crude oil, emulsion, and plant oil) were used. The analysis was performed under moderate sea conditions (wind speeds of 2–6 m/s and sea wave heights of less than 2 m), the incidence angles of 27°–49°, and the signal-to-noise ratio (SNR) of −3 to 11 dB within slicks. On the diagram plane, created by the RND parameter and the Bragg wave number, the mineral oil samples form a well-outlined zone, called a mineral oil zone. For C-band data, the plant oil samples were clearly distinguished from the mineral oils in the diagram. Determination of the confidence level for the detection of mineral oils versus plant oil was proposed using the mineral oil zone boundaries. The mineral oil data with SNR within slicks better than 2 dB lay within this zone with a confidence level better than 65%. The plant oil data with the same SNR lay outside this zone with a confidence level of better than 80%. For mineral oil with SNR of −3 dB, the confidence level is 55%. View Full-Text
Keywords: oil slicks; SAR images; Radarsat-2; TerraSAR-X; multi-polarization technique; normalized radar cross-section model oil slicks; SAR images; Radarsat-2; TerraSAR-X; multi-polarization technique; normalized radar cross-section model
►▼ Show Figures 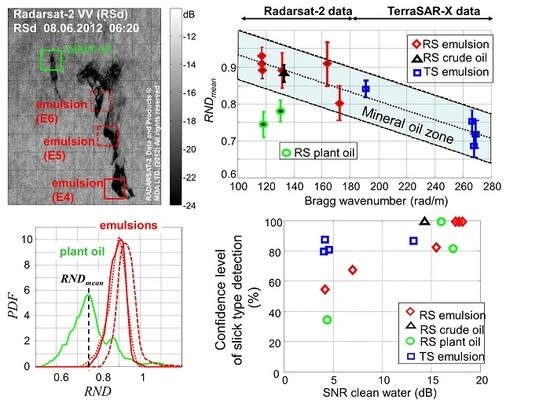