Impact of Fire Emissions on U.S. Air Quality from 1997 to 2016–A Modeling Study in the Satellite Era

A regional modeling system that integrates the state-of-the-art emissions processing (SMOKE), climate (CWRF), and air quality (CMAQ) models has been combined with satellite measurements of fire activities to assess the impact of fire emissions on the contiguous United States (CONUS) air quality during 1997–2016. The system realistically reproduced the spatiotemporal distributions of the observed meteorology and surface air quality, with a slight overestimate of surface ozone (O3) by ~4% and underestimate of surface PM2.5 by ~10%. The system simulation showed that the fire impacts on primary pollutants such as CO were generally confined to the fire source areas but its effects on secondary pollutants like O3 spread more broadly. The fire contribution to air quality varied greatly during 1997-2016 and occasionally accounted for more than 100 ppbv of monthly mean surface CO and over 20 µg m−3 of monthly mean PM2.5 in the Northwest U.S. and Northern California, two regions susceptible to frequent fires. Fire emissions also had implications on air quality compliance. From 1997 to 2016, fire emissions increased surface 8-hour O3 standard exceedances by 10% and 24-hour PM2.5 exceedances by 33% over CONUS. View Full-Text
Keywords: Satellite remote sensing; fire emissions; SMOKE-CWRF-CMAQ; Air Quality Satellite remote sensing; fire emissions; SMOKE-CWRF-CMAQ; Air Quality
►▼ Show Figures 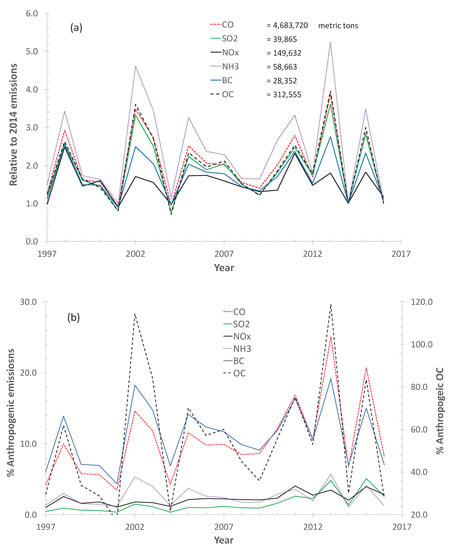