The goal of next-generation gravity missions (NGGM) is to improve the monitoring of mass transport in the Earth system by an increased space-time sampling capability as well as higher accuracies of a new generation of instrumentation, but also to continue the monitoring time series obtained by past and current missions such as GRACE and GRACE Follow-On. As the likelihood of three satellite pairs being simultaneously in orbit in the mid-term future increased, we have performed a closed-loop simulation to investigate the impact of a third pair in either polar or inclined orbit as an addition to a Bender-type constellation with NGGM instrumentation. For the additional pair, GRACE-like as well as NGGM instrumentation was tested. The analysis showed that the third pair mainly increases the redundancy of the monitoring system but does not significantly improve de-aliasing capabilities. The best-performing triple-pair scenario comprises a third inclined pair with NGGM sensors. Starting with a Bender-type constellation of a polar and an inclined satellite pair, simulation results indicate an average improvement of 11% in case of adding the third pair in a near-polar orbit, and of 21% for the third pair placed in an inclined orbit. The most important advantage of a multi-pair constellation, however, is the possibility to recover daily gravity fields with higher spatial resolution. In the case of the investigated triple-pair scenarios, a meaningful daily resolution with a maximum spherical harmonic degree of 26 can be achieved, while a higher daily parametrization up to degree 40 results in spatial aliasing and thus would need additional constraints or prior information. View Full-Text
Keywords: future gravity missions; time variable gravity; near-real time; numerical simulation; spherical harmonics future gravity missions; time variable gravity; near-real time; numerical simulation; spherical harmonics
►▼ Show Figures 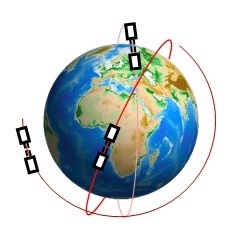