The current Polish Agricultural Drought Monitoring System (ADMS) adopted Climatic Water Balance (CWB) as the main indicator of crop losses caused by drought conditions. All meteorological data needed for CWB assessment are provided by the ground meteorological stations network. In 2018, the network consisted of 665 stations, among which in only 58 stations full weather parameters were registered. Therefore, only these stations offered a possibility to estimate the exact values of potential evapotranspiration, which is a component of the CWB algorithm. This limitation affects the quality of CWB raster maps, interpolated on the basis of the meteorological stations network for the entire country. However, the interpolation process itself may introduce errors; therefore, the adaptation of satellite data (that are spatially continuous) should be taken into account, even if the lack of data due to cloudiness remains a serious problem. In this paper, we involved the remote sensing data from MODIS instrument and considered the ability to integrate those data with values determined by using ground measurements. The paper presents results of comparisons for the CWB index assessed using ground station data and those obtained from potential evapotranspiration as the product from Moderate Resolution Imaging Spectroradiometer (MODIS) remote sensing instrument. The comparisons of results were performed for specific points (locations of ground stations) and were expressed by differences in means values. Analysis of Pearson’s correlation coefficient (r), Mann–Kendal trend test (Z-index), mean absolute error (MAE) and root mean square error (RMSE) for ten years’ series were evaluated and are presented. In addition, the basic spatial interpretation of results has been proposed. The correlation test revealed the r coefficient in the range from 0.06 to 0.68. The results show good trend agreement in time between two types of CWB with constantly higher values of this index, which is estimated using ground measurement data. In results for 34 (from 43 analyzed) stations the Mann–Kendal test provide the consistent trend, and only nine trends were inconsistent. Analyses revealed that the disagreement between the two considered indices (determined in different ways) increased significantly in the warmer period with a significant break point between R7 and R8 that falls at the end of May for each examined year. The value of MAE varied from 80 mm to 135 mm. View Full-Text
Keywords: PET; climatic water balance; MODIS; Mann–Kendall test PET; climatic water balance; MODIS; Mann–Kendall test
►▼ Show Figures 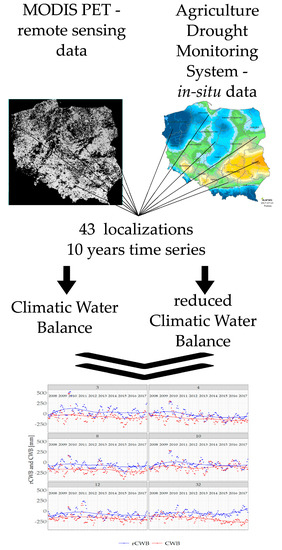