We evaluated the response of vegetation’s photosynthetic activity to drought conditions from 1998 to 2014 over Romania and the Republic of Moldova. The connection between vegetation stress and drought events was assessed by means of a correlation analysis between the monthly Standardized Precipitation Evaporation Index (SPEI), at several time scales, and the Normalized Difference Vegetation Index (NDVI), as well as an assessment of the simultaneous occurrence of extremes in both indices. The analysis of the relationship between drought and vegetation was made for the growing season (from April to October of the entire period), and special attention was devoted to the severe drought event of 2000/2001, considered as the driest since 1961 for the study area. More than three quarters (77%) of the agricultural land exhibits a positive correlation between the two indices. The sensitivity of crop areas to drought is strong, as the impacts were detected from May to October, with a peak in July. On the other hand, forests were found to be less sensitive to drought, as the impacts were limited mostly to July and August. Moreover, vegetation of all land cover classes showed a dependence between the sign of the correlation and the elevation gradient. Roughly 60% (20%) of the study domain shows a concordance of anomalously low vegetation activity with dry conditions of at least 50% (80%) in August. By contrast, a lower value of concordance was observed over the Carpathian Mountains. During the severe drought event of 2000/2001, a decrease in vegetation activity was detected for most of the study area, showing a decrease lasting at least 4 months, between April and October, for more than two thirds (71%) of the study domain. View Full-Text
Keywords: NDVI; SPEI; land cover; Romania; Republic of Moldova NDVI; SPEI; land cover; Romania; Republic of Moldova
►▼ Show Figures 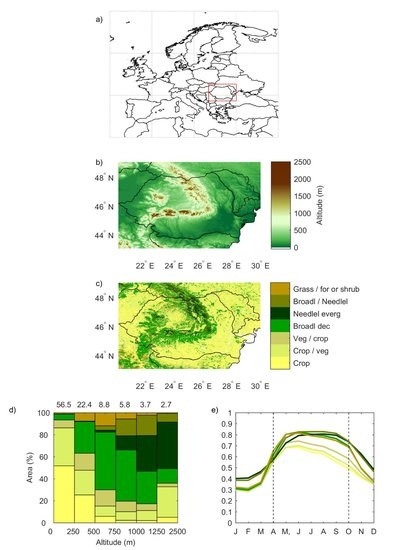