UV cameras have been used for over a decade in order to remotely sense SO2 emission rates from active volcanoes, and to thereby enhance our understanding of processes related to active and passive degassing. Whilst SO2 column density retrievals can be more accurate/sophisticated using alternative techniques (e.g., Differential Optical Absorption Spectrometer (DOAS), Correlation Spectrometer (COSPEC)), due to their higher spectral resolutions, UV cameras provide the advantage of high time-resolution emission rates, a much greater spatial resolution, and the ability to simultaneously retrieve plume speeds. Nevertheless, the relatively high costs have limited their uptake to a limited number of research groups and volcanic observatories across the planet. One recent intervention in this regard has been the introduction of the PiCam UV camera, which has considerably lowered instrumental cost. Here we present the first data obtained with the PiCam system from seven persistently degassing volcanoes in northern Chile, demonstrating robust field operation in challenging conditions and over an extended period of time, hence adding credence to the potential of these units for more widespread dissemination to the international volcanic gas measurement community. Small and weak plumes, as well as strongly degassing plumes were measured at distances ranging 0.6–10.8 km from the sources, resulting in a wide range of SO2 emission rates, varying from 3.8 ± 1.8 to 361 ± 31.6 td−1. Our acquired data are discussed with reference to previously reported emission rates from other ground-based remotely sensed techniques at the same volcanoes, in particular considering: resolution of single plume emissions in multi-plume volcanoes, light dilution, plume geometry, seasonal effects, and the applied plume speed measurement methodology. The main internal/external factors that influence positive/negative PiCam measurements include camera shake, light dilution, and the performance of the OpenCV and control points post processing methods. A simple reprocessing method is presented in order to correct the camera shake. Finally, volcanoes were separated into two distinct groups: low and moderate SO2 emission rates systems. These groups correlate positively with their volcanological characteristics, especially with the fluid compositions from fumaroles. View Full-Text
Keywords: PiCam; central volcanic zone; SO2 emission rates; volcanic degassing; Andes PiCam; central volcanic zone; SO2 emission rates; volcanic degassing; Andes
►▼ Show Figures 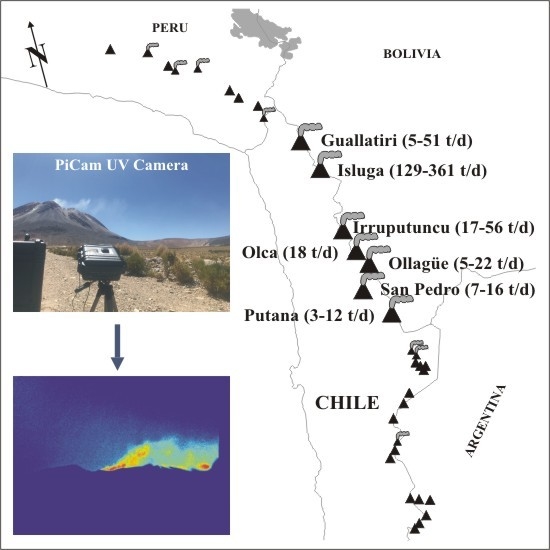