Tree Crown Delineation Algorithm Based on a Convolutional Neural Network

For many decades, kriging and deterministic interpolation techniques, such as inverse distance weighting and nearest neighbour interpolation, have been the most popular spatial interpolation techniques. Kriging with external drift and regression kriging have become basic techniques that benefit both from spatial autocorrelation and covariate information. More recently, machine learning techniques, such as random forest and gradient boosting, have become increasingly popular and are now often used for spatial interpolation. Some attempts have been made to explicitly take the spatial component into account in machine learning, but so far, none of these approaches have taken the natural route of incorporating the nearest observations and their distances to the prediction location as covariates. In this research, we explored the value of including observations at the nearest locations and their distances from the prediction location by introducing Random Forest Spatial Interpolation (RFSI). We compared RFSI with deterministic interpolation methods, ordinary kriging, regression kriging, Random Forest and Random Forest for spatial prediction (RFsp) in three case studies. The first case study made use of synthetic data, i.e., simulations from normally distributed stationary random fields with a known semivariogram, for which ordinary kriging is known to be optimal. The second and third case studies evaluated the performance of the various interpolation methods using daily precipitation data for the 2016–2018 period in Catalonia, Spain, and mean daily temperature for the year 2008 in Croatia. Results of the synthetic case study showed that RFSI outperformed most simple deterministic interpolation techniques and had similar performance as inverse distance weighting and RFsp. As expected, kriging was the most accurate technique in the synthetic case study. In the precipitation and temperature case studies, RFSI mostly outperformed regression kriging, inverse distance weighting, random forest, and RFsp. Moreover, RFSI was substantially faster than RFsp, particularly when the training dataset was large and high-resolution prediction maps were made. View Full-Text
Keywords: spatial interpolation; machine learning; random forest; kriging; daily precipitation; daily temperature spatial interpolation; machine learning; random forest; kriging; daily precipitation; daily temperature
►▼ Show Figures 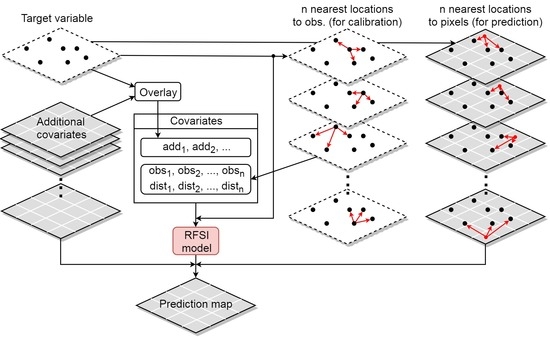