Disturbance monitoring is an important application of the Landsat times series, both to monitor forest dynamics and to support wise forest management at a variety of spatial and temporal scales. In the last decade, there has been an acceleration in the development of approaches designed to put the Landsat archive to use towards these causes. Forest disturbance mapping has moved from using individual change-detection algorithms, which implement a single set of decision rules that may not apply well to a range of scenarios, to compiling ensembles of such algorithms. One approach that has greatly reduced disturbance detection error has been to combine individual algorithm outputs in Random Forest (RF) ensembles trained with disturbance reference data, a process called stacking (or secondary classification). Previous research has demonstrated more robust and sensitive detection of disturbance using stacking with both multialgorithm ensembles and multispectral ensembles (which make use of a single algorithm applied to multiple spectral bands). In this paper, we examined several additional dimensions of this problem, including: (1) type of algorithm (represented by processes using one image per year vs. all historical images); (2) spectral band choice (including both the basic Landsat reflectance bands and several popular indices based on those bands); (3) number of algorithm/spectral-band combinations needed; and (4) the value of including both algorithm and spectral band diversity in the ensembles. We found that ensemble performance substantially improved per number of model inputs if those inputs were drawn from a diversity of both algorithms and spectral bands. The best models included inputs from both algorithms, using different variants of shortwave-infrared (SWIR) and near-infrared (NIR) reflectance. Further disturbance detection improvement may depend upon the development of algorithms which either interrogate SWIR and NIR in new ways or better highlight disturbance signals in the visible wavelengths. View Full-Text
Keywords: Landsat-time-series; forest disturbance; stacking; TimeSync; LandTrendr; COLD Landsat-time-series; forest disturbance; stacking; TimeSync; LandTrendr; COLD
►▼ Show Figures 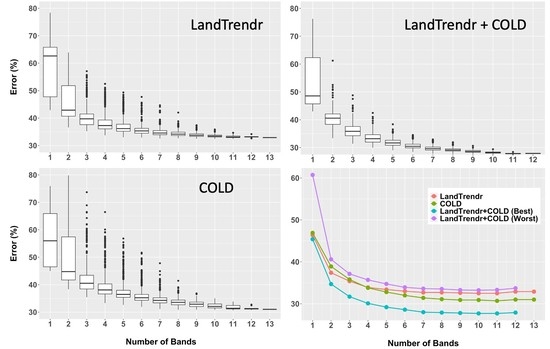