Ephemeral rivers are vital to ecosystem balance and human activities as essential surface runoff, while convenient and effective ways of calculating the peak discharge of ephemeral rivers are scarce, especially in ungauged areas. In this study, a new method was proposed using an unmanned aerial vehicle (UAV) combined with the incipient motion of stones to calculate the peak discharge of ephemeral rivers in northwestern China, a typical arid ungauged region. Two field surveys were conducted in dry seasons of 2017 and 2018. Both the logarithmic and the exponential velocity distribution methods were examined when estimating critical initial velocities of moving stones. Results reveal that centimeter-level orthoimages derived from UAV data can demonstrate the movement of stones in the ephemeral river channel throughout one year. Validations with peak discharge through downstream culverts confirmed the effectiveness of the method. The exponential velocity distribution method performs better than the logarithmic method regardless of the amount of water through the two channels. The proposed method performs best in the combination of the exponential method and the river channel with evident flooding (>20 m3/s), with the relative accuracy within 10%. In contrast, in the river channel with a little flow (around 1 m3/s), the accuracies are weak because of the limited number of small moving stones found due to the current resolution of UAV data. The poor performance in the river channel with a little flow could further be improved by identifying smaller moving stones, especially using UAV data with better spatial resolution. The presented method is easy and flexible to apply with appropriate accuracy. It also has great potential for extensive applications in obtaining runoff information of ephemeral rivers in ungauged regions, especially with the quick advance of UAV technology. View Full-Text
Keywords: UAV remote sensing; Ephemeral rivers; flood peak discharge; incipient motion; arid ungauged regions UAV remote sensing; Ephemeral rivers; flood peak discharge; incipient motion; arid ungauged regions
►▼ Show Figures 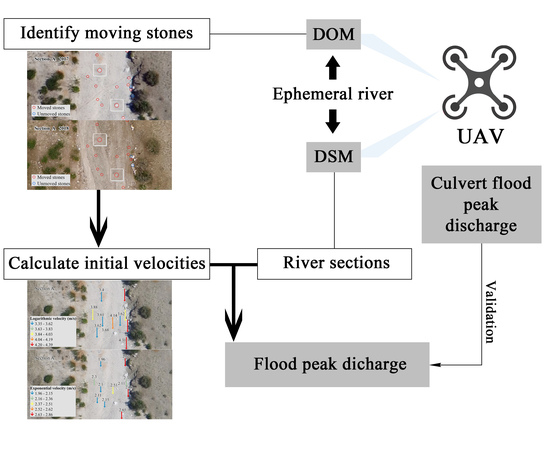