The dynamical tropopause is the interface between the stratosphere and the troposphere, whose variation gives indication of weather and climate changes. In the past, the dynamical tropopause height determination mainly depends on analysis and diagnose methods. While, due to the high computational cost, it is difficult to obtain tropopause structures with high spatiotemporal resolution in real time by these methods. To solve this problem, the statistical method is used to establish the dynamical tropopause pressure retrieval model based on Fengyun-4A geostationary meteorological satellite observations. Four regression schemes including random forest (RF) regression are evaluated. By comparison with GEOS-5 (the Goddard Earth Observing System Model of version 5) and ERA-Interim (European Center for Medium-Range Weather Forecasts Reanalysis-Interim) reanalysis, it is found that among the four schemes, the RF-based retrieval model is most accurate and reliable (RMSEs (root mean square errors) are 25.99 hPa and 43.05 hPa, respectively, as compared to GEOS-5 and ERA-Interim reanalysis). A series of sensitivity experiments are performed to investigate the contributions of the predictors in the RF-based model. Results suggest that 6.25 μm channel information representing the distributions of the potential vorticity and water vapor in upper troposphere has the greatest contribution, while 10.8 and 12 μm channels information have relatively weak influences. Therefore, a simplified model without involving a brightness temperature of 10.8 and 12 μm can be adopted to improve the calculation efficiency. View Full-Text
Keywords: dynamical tropopause pressure; statistical retrieval; random forest regression; Fengyun-4 geostationary meteorological satellite dynamical tropopause pressure; statistical retrieval; random forest regression; Fengyun-4 geostationary meteorological satellite
►▼ Show Figures 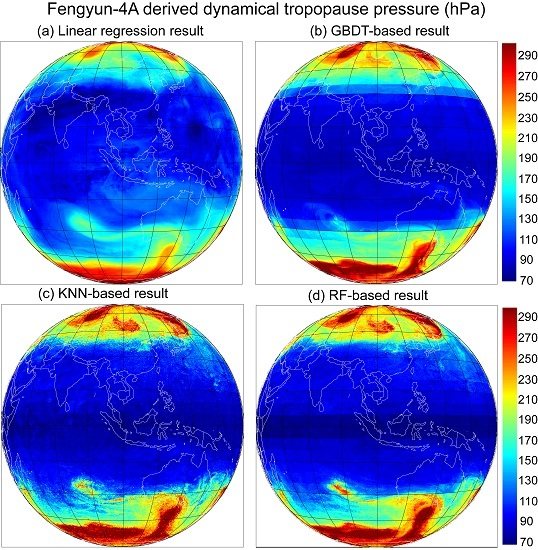