A Partition Modeling for Anthropogenic Heat Flux Mapping in China

Anthropogenic heat (AH) generated by human activities has a major impact on urban and regional climate. Accurately estimating anthropogenic heat is of great significance for studies on urban thermal environment and climate change. In this study, a gridded anthropogenic heat flux (AHF) estimation scheme was constructed based on socio-economic data, energy-consumption data, and multi-source remote sensing data using a partition modeling method, which takes into account the regional characteristics of AH emission caused by the differences in regional development levels. The refined AHF mapping in China was realized with a high resolution of 500 m. The results show that the spatial distribution of AHF has obvious regional characteristics in China. Compared with the AHF in provinces, the AHF in Shanghai is the highest which reaches 12.56 W·m−2, followed by Tianjin, Beijing, and Jiangsu. The AHF values are 5.92 W·m−2, 3.35 W·m−2, and 3.10 W·m−2, respectively. As can be seen from the mapping results of refined AHF, the high-value AHF aggregation areas are mainly distributed in north China, east China, and south China. The high-value AHF in urban areas is concentrated in 50–200 W·m−2, and maximum AHF in Shenzhen urban center reaches 267 W·m−2. Further, compared with other high resolution AHF products, it can be found that the AHF results in this study have higher spatial heterogeneity, which can better characterize the emission characteristics of AHF in the region. The spatial pattern of the AHF estimation results correspond to the distribution of building density, population, and industry zone. The high-value AHF areas are mainly distributed in airports, railway stations, industry areas, and commercial centers. It can thus be seen that the AHF estimation models constructed by the partition modeling method can well realize the estimation of large-scale AHF and the results can effectively express the detailed spatial distribution of AHF in local areas. These results can provide technical ideas and data support for studies on surface energy balance and urban climate change. View Full-Text
Keywords: partition modeling; energy-consumption inventory approach; nighttime light data; anthropogenic heat flux partition modeling; energy-consumption inventory approach; nighttime light data; anthropogenic heat flux
►▼ Show Figures 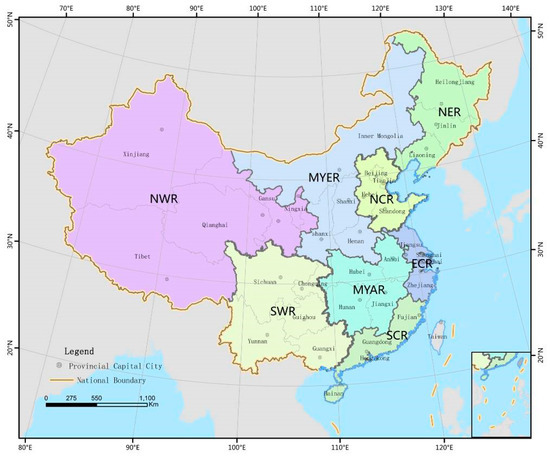