:
This work analyzes the satellite cross-talk observed by the microwave interferometric reflectometer (MIR), a new global navigation satellite system (GNSS) reflectometer, during an airborne field campaign in Victoria and New South Wales, Australia. MIR is a GNSS reflectometer with two 19-element, dual-band arrays, each of them having four steerable beams. The data collected during the experiment, the characterization of the arrays, and the global positioning system (GPS) and Galileo ephemeris were used to compute the expected delays and power levels of all incoming signals, and the probability of cross-talk was then evaluated. Despite the MIR highly directive arrays, the largest ever for a GNSS-R instrument, one of the flights was found to be contaminated by cross-talk almost half of the time at the L1/E1 frequency band, and all four flights were contaminated ∼5–10% of the time at the L5/E5a frequency band. The cross-talk introduces an error of up to 40 cm of standard deviation for altimetric applications and about 0.24 dB for scatterometric applications.
Keywords:
GNSS; reflectometry; interferometric; satellite cross-talk; antenna array 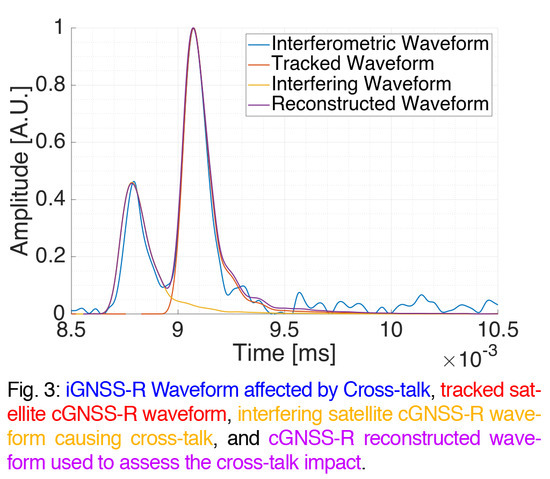 As compared to conventional global navigation satellite system (GNSS)-reflectometry (cGNSS-R) [1], in which the reflected signal is cross-correlated with a locally generated clean replica of the transmitted code, in interferometric GNSS-R (iGNSS-R) the direct signal transmitted by the GNSS satellites is cross-correlated with the same transmitted signal after it has been scattered on the Earth’s surface [2]. This way, iGNSS-R is able to make use of the private signals, that have a wider bandwidth (such as M-code, with up to 40 MHz), achieving thus a higher accuracy. However, the resulting cross-correlations are noisier than in cGNSS-R, they are more sensitive to radio frequency interferences (RFI), and the cross-correlation peaks of multiple visible satellites may be visible in the correlated data. This last phenomenon is called satellite cross-talk, and affects altimetric and scatterometric retrievals [3]. In iGNSS-R, the position of the cross-correlation peak depends on the time difference and the Doppler frequency difference between the direct and the reflected signals. The time delay difference depends on the geometry of the reflections [4]. In ground-based and airborne iGNSS-R, the Doppler difference is essentially non-existent [3]. Since the time delay between the direct and reflected signals is proportional to the sensor height, as altitude decreases the risk of cross-talk increases [3]. This is the case in ground-based and airborne reflectometry as compared to spaceborne reflectometry, and thus high-directive arrays are required to spatially filter the contributions of undesired satellites. In spaceborne reflectometry the direct and reflected signals are received with a different Doppler frequency, but the correlations are also spread in the Doppler domain [5], which in addition to the higher altitude makes cross-talk less frequent but not negligible [3]. Besides, as more constellations are deployed with shared bands (e.g., GPS L1 and Galileo E1, or GPS L5 and Galileo E5a), the probability of two satellites being close in the sky (from the receiver point of view) increases, and so the efficiency of spatial filtering decreases.
This work analyzes the satellite cross-talk that affected four flights of the microwave interferometric reflectometer (MIR) instrument [6]. First, Section 2 briefly describes the MIR instrument and the field campaign. Then, Section 3 describes the two metrics used to analyze the satellite cross-talk, the angular distance to the closest satellite and the worst received signal-to-interference ratio (SIR), and how the cross-talk induced error is estimated. Section 4 presents the results of the analysis, before conclusions are drawn in Section 5.

MIR is a GNSS reflectometer that mimics some of the passive reflectometry and interferometry system-in orbit demonstrator (PARIS-IoD) capabilities [4], such as high directive steerable arrays: two 19-element hexagonal arrays, an up-looking right hand circular polarization (RHCP) one for the direct signal transmitted from the GNSS satellites, and a down-looking left hand circular polarization (LHCP) one for the reflected signal scattered on the Earth’s surface. Both antenna arrays are dual-band (L1/E1 and L5/E5a frequency bands), and multi-beam (two beams per band, therefore up to four different satellites can be tracked simultaneously). The received data is sampled by pairs of up- and down-looking beams synchronously at 1 bit for the I and Q components at 32,736 Msps, and stored for later post-processing. A detailed description of the instrument can be found in [6]. The instrument was mounted in a research airplane (see Figure 1).
The field campaign was carried out in Victoria and New South Wales, Australia, between April and June 2018. A total of four flights were conducted: two flights over the sea, and two flights over land. The first flight was on 30 April 2018 over the entrance to Port Phillip Bay, Victoria, to test the instrument over open water. The airplane flew twice over the Point Lonsdale tide gauge and over the Point Nepean buoy, first at 800 and then at 1500 m above sea level, and at an average ground speed of 65 m/s. These stations provided sea level ground truth, and the information on the significant wave height and wave period. The second flight, over the Bass Strait, was conducted on 6 June 2018 departing from Mallacoota (Victoria) following a Cryosat-2 ground track to a distance of 125 km offshore (see Figure 2). The average ground speed was 75 m/s when flying out and 60 m/s when flying back, and was flown at 1400 m above the sea level. The two flights over land were conducted on 1 May 2018 (after 15 days without any rain event, and 9.2 mm accumulated rainfall in the previous 89 days) and on 18 June 2018 (after 8.2 mm accumulated rainfall the previous day and 24.6 mm accumulated rainfall in the previous nine days) [7] over the OzNet soil moisture sensor network in Yanco, NSW [8]. Both flights were conducted at 250–350 m above the sea level with an average ground speed of 60 m/s. A total of six hours and 30 min of data was collected for all four flights.
According to [3], the MIR highly directive arrays (∼19 dB) should be able to avoid most of the satellite cross-talk. However, more than half of the Bass Strait flight data was contaminated in the L5/E5a frequency band, which prompted an analysis to determine the instance when this occurred and its impact on the GNSS-R observables.

This work shows evidence of satellite cross-talk in iGNSS-R using highly directive antennas, and analyzes its impact on three different delay estimators and the peak value estimation. While this effect should be less important for spaceborne receivers [3], its effects are still not negligible and must be accounted for. The cross-talk probabilities for different signal-to-interference ratios have been computed and contaminated waveforms have been presented. The cross-talk occurrence below 10% of the total time in three of the four flights are in accordance with the predictions in [3], but longer flights are recommended to validate it.
The effect of cross-talk in the main three delay estimators (MAX, DER, and HALF) and in the peak amplitude estimation has also been assessed for this particular flight and sea surface roughness. The standard deviation of the error estimation increased from 18 cm up to 40 cm, which exceeds the centimetric precision of the altimetric accuracy requirements. Analogously, the standard deviation of the amplitude estimation increased up to 0.24 dB, which also might affect the retrievals of soil parameters such as surface roughness and soil moisture. Even using highly directive arrays, the degradation of the waveforms caused by satellite cross-talk could not be avoided, which should be taken into account for future ground-based and airborne interferometric GNSS-R missions. Results may differ for other sea conditions, and further studies are required both over sea and land.

Thanks to Tomoji Takasu for his help finding a system unified ephemeris database. 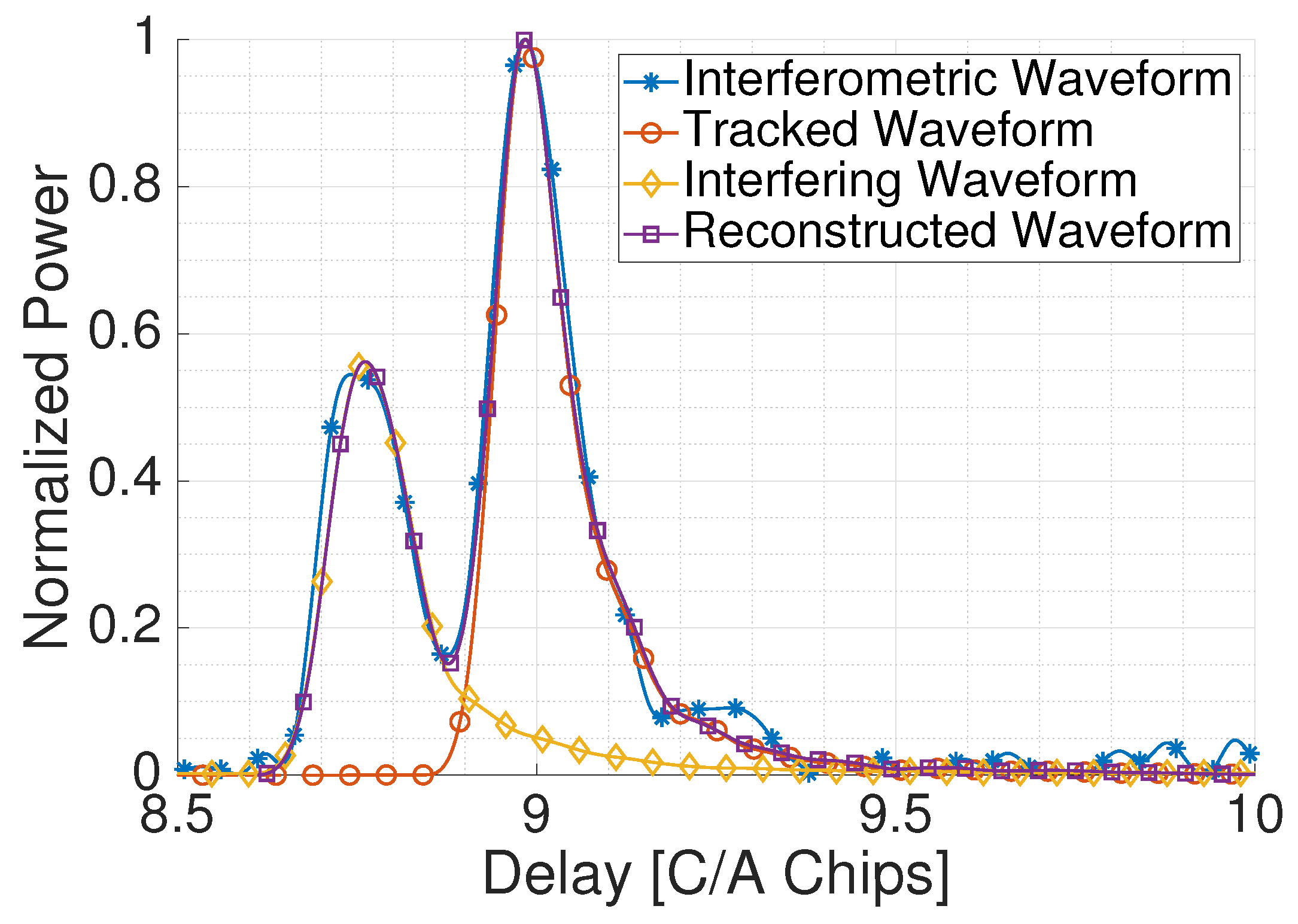 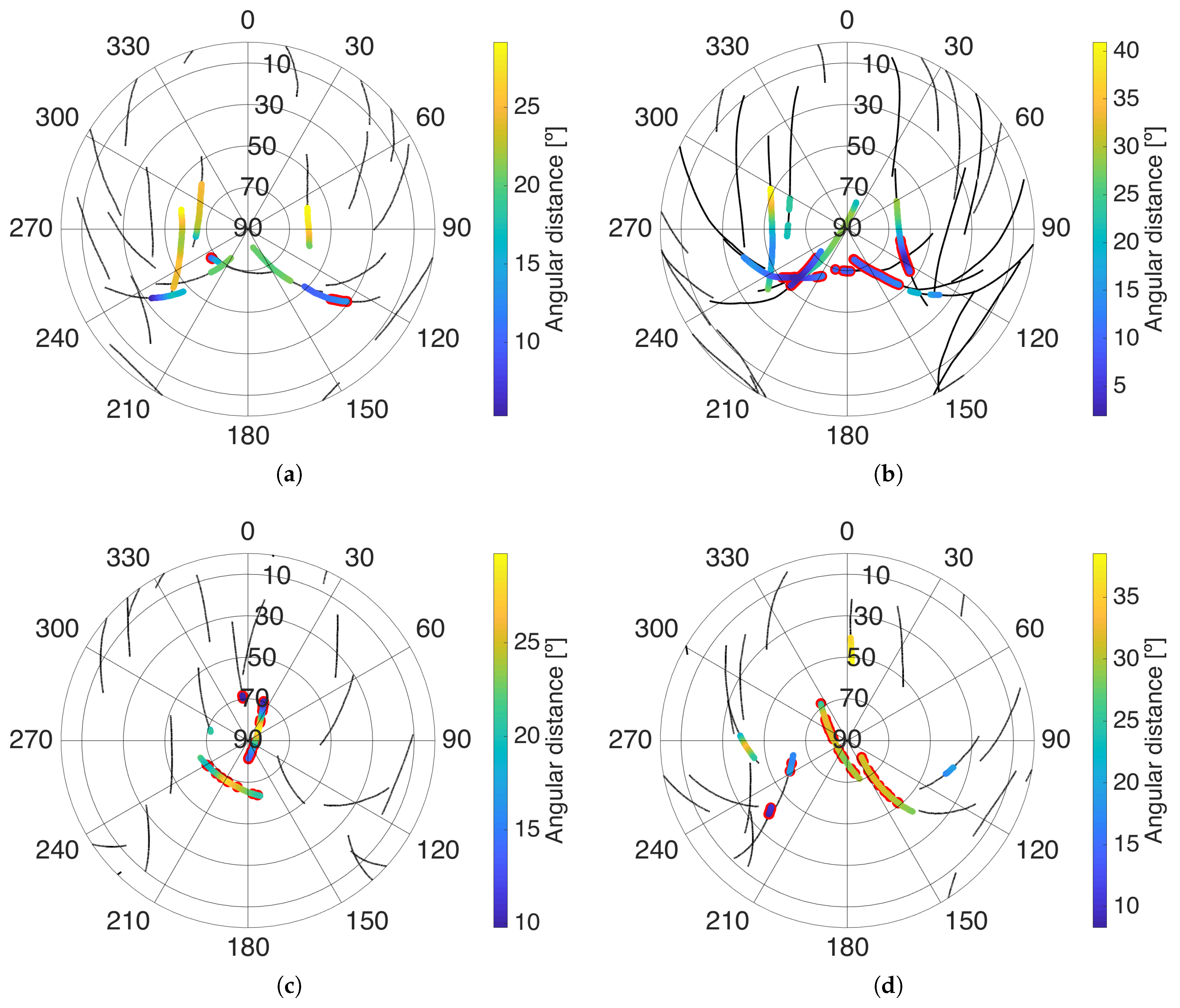 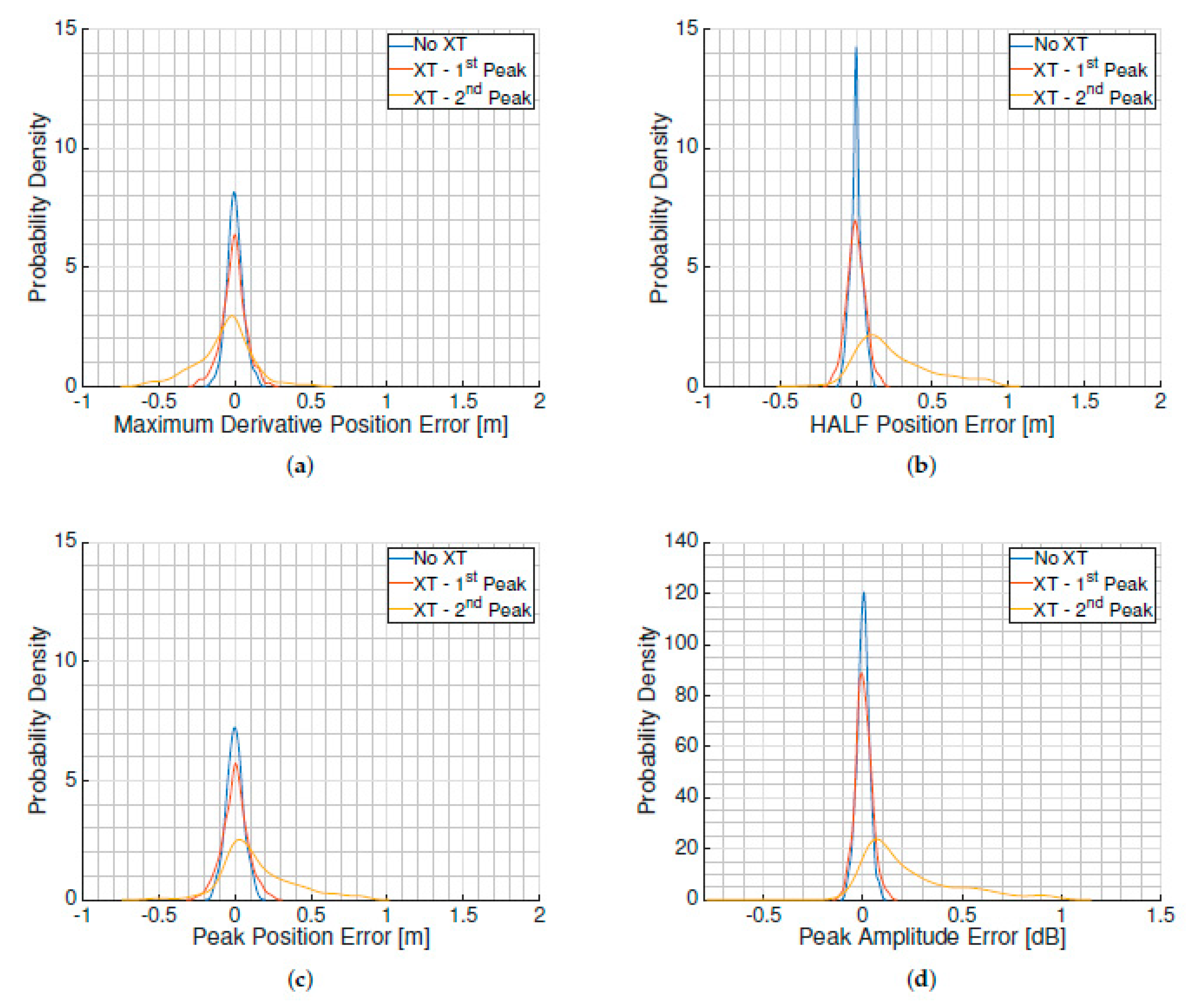