GPR Survey on an Iron Mining Area after the Collapse of the Tailings Dam I at the Córrego do Feijão Mine in Brumadinho-MG, Brazil

With the warming of the global climate, the mass loss of the Greenland ice sheet is intensifying, having a profound impact on the rising of the global sea level. Here, we used Gravity Recovery and Climate Experiment (GRACE) RL06 data to retrieve the time series variations of ice sheet mass in Greenland from January 2003 to December 2015. Meanwhile, the spatial changes of ice sheet mass and its relationship with land surface temperature are studied by means of Theil–Sen median trend analysis, the Mann–Kendall (MK) test, empirical orthogonal function (EOF) analysis, and wavelet transform analysis. The results showed: (1) in terms of time, we found that the total mass of ice sheet decreases steadily at a speed of −195 ± 21 Gt/yr and an acceleration of −11 ± 2 Gt/yr2 from 2003 to 2015. This mass loss was relatively stable in the two years after 2012, and then continued a decreasing trend; (2) in terms of space, the mass loss areas of the Greenland ice sheet mainly concentrates in the southeastern, southwestern, and northwestern regions, and the southeastern region mass losses have a maximum rate of more than 27 cm/yr (equivalent water height), while the northeastern region show a minimum rate of less than 3 cm/yr, showing significant changes as a whole. In addition, using spatial distribution and the time coefficients of the first two models obtained by EOF decomposition, ice sheet quality in the southeastern and northwestern regions of Greenland show different significant changes in different periods from 2003 to 2015, while the other regions showed relatively stable changes; (3) in terms of driving factors temperature, there is an anti-phase relationship between ice sheet mass change and land surface temperature by the mean XWT-based semblance value of −0.34 in a significant oscillation period variation of 12 months. Meanwhile, XWT-based semblance values have the largest relative change in 2005 and 2012, and the smallest relative change in 2009 and 2010, indicating that the influence of land surface temperature on ice sheet mass significantly varies in different years. View Full-Text
Keywords: Greenland ice sheet; GRACE; Theil–Sen median trend analysis; Empirical Orthogonal function analysis; wavelet transform analysis Greenland ice sheet; GRACE; Theil–Sen median trend analysis; Empirical Orthogonal function analysis; wavelet transform analysis
►▼ Show Figures 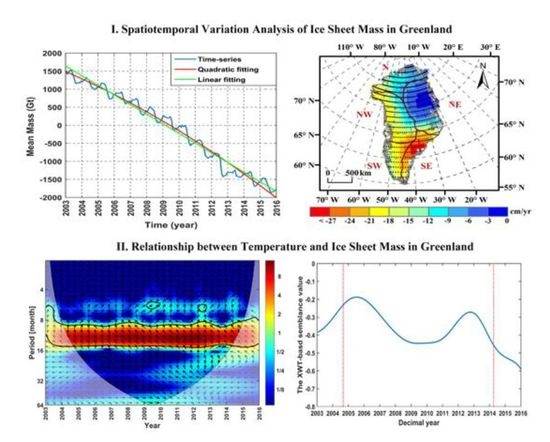