Mapping landfast sea ice at a fine spatial scale is not only meaningful for geophysical study, but is also of benefit for providing information about human activities upon it. The combination of unmanned aerial systems (UAS) with structure from motion (SfM) methods have already revolutionized the current close-range Earth observation paradigm. To test their feasibility in characterizing the properties and dynamics of fast ice, three flights were carried out in the 2016–2017 austral summer during the 33rd Chinese National Antarctic Expedition (CHINARE), focusing on the area of the Prydz Bay in East Antarctica. Three-dimensional models and orthomosaics from three sorties were constructed from a total of 205 photos using Agisoft PhotoScan software. Logistical challenges presented by the terrain precluded the deployment of a dedicated ground control network; however, it was still possible to indirectly assess the performance of the photogrammetric products through an analysis of the statistics of the matching network, bundle adjustment, and Monte-Carlo simulation. Our results show that the matching networks are quite strong, given a sufficient number of feature points (mostly > 20,000) or valid matches (mostly > 1000). The largest contribution to the total error using our direct georeferencing approach is attributed to inaccuracies in the onboard position and orientation system (POS) records, especially in the vehicle height and yaw angle. On one hand, the 3D precision map reveals that planimetric precision is usually about one-third of the vertical estimate (typically 20 cm in the network centre). On the other hand, shape-only errors account for less than 5% for the X and Y dimensions and 20% for the Z dimension. To further illustrate the UAS’s capability, six representative surface features are selected and interpreted by sea ice experts. Finally, we offer pragmatic suggestions and guidelines for planning future UAS-SfM surveys without the use of ground control. The work represents a pioneering attempt to comprehensively assess UAS-SfM survey capability in fast ice environments, and could serve as a reference for future improvements. View Full-Text
Keywords: landfast sea ice; unmanned aerial system (UAS); Antarctic expedition; structure from motion (SfM); surface features; photogrammetry landfast sea ice; unmanned aerial system (UAS); Antarctic expedition; structure from motion (SfM); surface features; photogrammetry
►▼ Show Figures 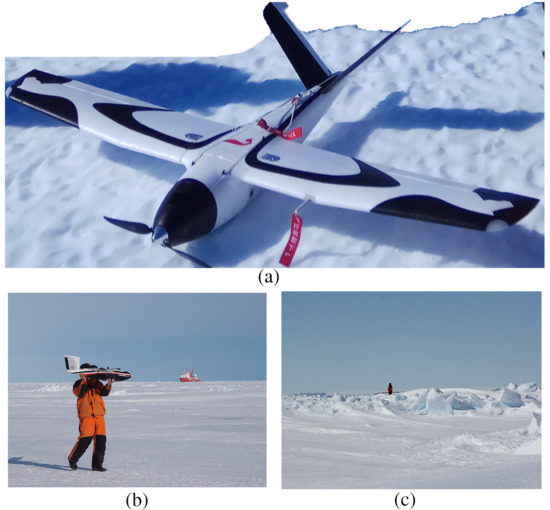