This study tested the potential of a short time series of very high spatial resolution (cm to dm) remote sensing datasets obtained from unmanned aerial system (UAS)-based photogrammetry and terrestrial laser scanning (TLS) to monitor snow cover ablation in the upper Dischma valley (Davos, Switzerland). Five flight missions (for UAS) and five scans (for TLS) were carried out simultaneously: Four during the snow-covered period (9, 10, 11, and 27 May 2016) and one during the snow-free period (24 June 2016 for UAS and 31 May 2016 for TLS). The changes in both the areal extent of the snow cover and the snow depth (HS) were assessed together in the same case study. The areal extent of the snow cover was estimated from both UAS- and TLS-based orthophotos by classifying pixels as snow-covered and snow-free based on a threshold value applied to the blue band information of the orthophotos. Also, the usage possibility of TLS-based orthophotos for mapping snow cover was investigated in this study. The UAS-based orthophotos provided higher overall classification accuracy (97%) than the TLS-based orthophotos (86%) and allowed for mapping snow cover in larger areas than the ones from TLS scans by preventing the occurrence of gaps in the orthophotos. The UAS-based HS were evaluated and compared to TLS-based HS. Initially, the CANUPO (CAractérisation de NUages de POints) binary classification method, a proposed approach for improving the quality of models to obtain more accurate HS values, was applied to the TLS 3D raw point clouds. In this study, the use of additional artificial ground control points (GCPs) was also proposed to improve the quality of UAS-based digital elevation models (DEMs). The UAS-based HS values were mapped with an error of around 0.1 m during the time series. Most pixels representing change in the HS derived from the UAS data were consistent with the TLS data. The time series used in this study allowed for testing of the significance of the data acquisition interval in the monitoring of snow ablation. Accordingly, this study concluded that both the UAS- and TLS-based high-resolution DSMs were biased in detecting change in HS, particularly for short time spans, such as a few days, where only a few centimeters in HS change occur. On the other hand, UAS proved to be a valuable tool for monitoring snow ablation if longer time intervals are chosen. View Full-Text
Keywords: CANUPO; snow ablation; snow depth; TLS; UAS CANUPO; snow ablation; snow depth; TLS; UAS
►▼ Show Figures 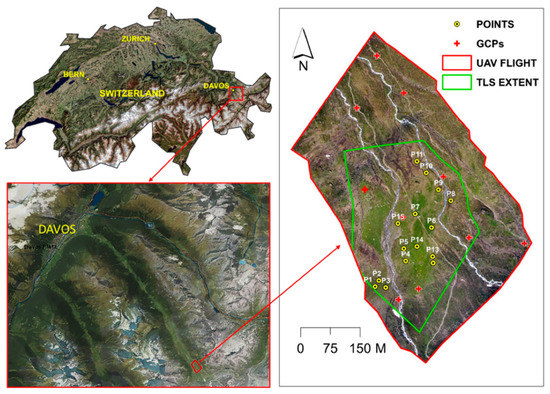