A good understanding of how meteorological conditions exacerbate or mitigate air pollution is critical for developing robust emission reduction policies. Thus, based on a multiple linear regression (MLR) model in this study, the quantified impacts of six meteorological variables on PM2.5 (i.e., particle matter with diameter of 2.5 µm or less) and its major components were estimated over the Yangtze River Basin (YRB). The 38-year (1980–2017) daily PM2.5 and meteorological data were derived from the newly-released Modern-Era Retrospective Analysis and Research and Application, version 2 (MERRA-2) products. The MERRA-2 PM2.5 was underestimated compared with ground measurements, partly due to the bias in the MERRA-2 Aerosol Optical Depth (AOD) assimilation. An over-increasing trend in each PM2.5 component occurred for the whole study period; however, this has been curbed since 2007. The MLR model suggested that meteorological variability could explain up to 67% of the PM2.5 changes. PM2.5 was robustly anti-correlated with surface wind speed, precipitation and boundary layer height (BLH), but was positively correlated with temperature throughout the YRB. The relationship of relative humidity (RH) and total cloud cover with PM2.5 showed regional dependencies, with negative correlation in the Yangtze River Delta (YRD) and positive correlation in the other areas. In particular, PM2.5 was most sensitive to surface wind speed, and the sensitivity was approximately −2.42 µg m−3 m−1 s. This study highlighted the impact of meteorological conditions on PM2.5 growth, although it was much smaller than the anthropogenic emissions impact. View Full-Text
Keywords: MERRA-2; PM2.5; meteorological variables; Yangtze River basin MERRA-2; PM2.5; meteorological variables; Yangtze River basin
►▼ Show Figures 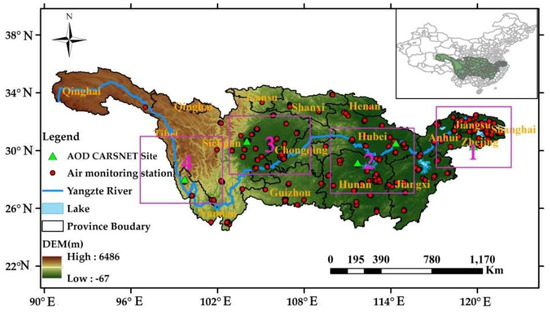