The performance of Level-3 gridded Global Precipitation Mission (GPM)-based precipitation products (IMERG, Integrated Multi-satellite Retrievals for GPM) is assessed against two references over oceans: the OceanRAIN dataset, derived from oceanic shipboard disdrometers, and a satellite-based radar product (the Level-3 Dual-frequency Precipitation Radar, 3DPRD). Daily IMERG products (early, late, final) and microwave-only (MW) and Infrared-only (IR) precipitation components are evaluated at four different spatial resolutions (0.5°, 1°, 2°, and 3°) during a 3-year study period (March 2014–February 2017). Their performance is assessed based on both categorical and continuous performance metrics, including correlation coefficient, probability of detection, success ratio, bias, and root mean square error (RMSE). A triple collocation analysis (TCA) is also presented to further investigate the performance of these satellite-based products. Overall, the IMERG products show an underestimation with respect to OceanRAIN. Rain events in OceanRAIN are correctly detected by all IMERG products ~80% of the times. IR estimates show relatively large errors and low correlations with OceanRAIN compared to the other products. On the other hand, the MW component performs better than other products in terms of both categorical and continuous statistics. TCA reveals that 3DPRD performs consistently better than OceanRAIN in terms of RMSE and coefficient of determination at all spatial resolutions. This work is part of a larger effort to validate GPM products over nontraditional regions such as oceans. View Full-Text
Keywords: precipitation; satellite remote sensing; error analysis; triple collocation precipitation; satellite remote sensing; error analysis; triple collocation
►▼ Show Figures 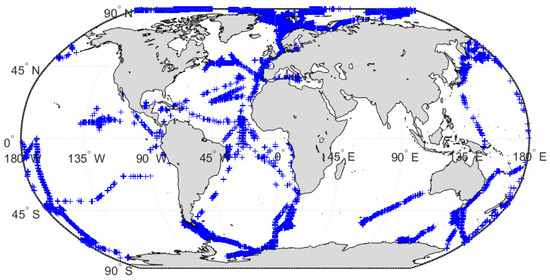