Assessment of disease incidence and severity at farm scale or in agronomic trials is frequently performed based on visual crop inspection, which is a labor intensive task prone to errors associated with its subjectivity. Therefore, alternative methods to relate disease incidence and severity with changes in crop traits are of great interest. Optical imagery in the visible and near-infrared (Vis-NIR) can potentially be used to detect changes in crop traits caused by pathogen development. Also, cameras on-board of Unmanned Aerial Vehicles (UAVs) have flexible data collection capabilities allowing adjustments considering the trade-off between data throughput and its resolution. However, studies focusing on the use of UAV imagery to describe changes in crop traits related to disease infection are still lacking. More specifically, evaluation of late blight (Phytophthora infestans) incidence in potato concerning early discrimination of different disease severity levels has not been extensively reported. In this article, the description of spectral changes related to the development of potato late blight under low disease severity levels is performed using sub-decimeter UAV optical imagery. The main objective was to evaluate the sensitivity of the data acquired regarding early changes in crop traits related to disease incidence. For that, UAV images were acquired on four dates during the growing season (from 37 to 78 days after planting), before and after late blight was detected in the field. The spectral variability observed in each date was summarized using Simplex Volume Maximization (SiVM), and its relationship with experimental treatments (different crop systems) and disease severity levels (evaluated by visual assessment) was determined based on pixel-wise log-likelihood ratio (LLR) calculation. Using this analytical framework it was possible to identify considerable spectral changes related to late blight incidence in different treatments and also to disease severity level as low as between 2.5 and 5.0% of affected leaf area. Comparison of disease incidence and spectral information acquired using UAV (with 4–5 cm of spatial resolution) and ground-based imagery (with 0.1–0.2 cm of spatial resolution) indicate that UAV data allowed identification of patterns comparable to those described by ground-based images, despite some differences concerning the distribution of affected areas detected within the sampling units and an attenuation in the signal measured. Finally, although aggregated information at sampling unit level provided discriminative potential for higher levels of disease development, focusing on spectral information related to disease occurrence increased the discriminative potential of the data acquired. View Full-Text
Keywords: hyperspectral sensing; very high resolution imagery; disease assessment; crop monitoring hyperspectral sensing; very high resolution imagery; disease assessment; crop monitoring
►▼ Show Figures 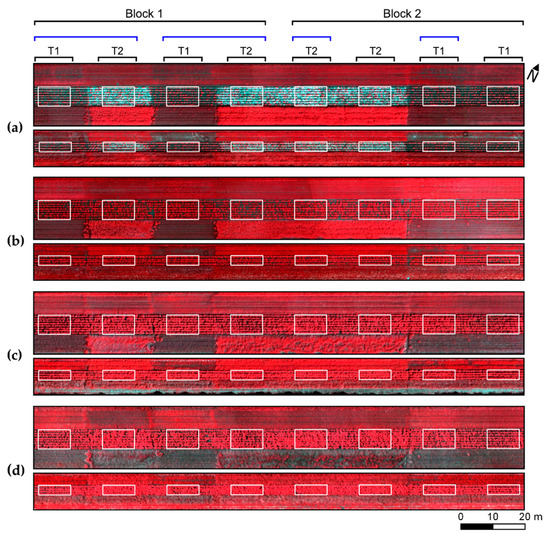