Among grapevine diseases affecting European vineyards, Flavescence dorée (FD) and Grapevine Trunk Diseases (GTD) are considered the most relevant challenges for viticulture because of the damage they cause to vineyards. Unmanned Aerial Vehicle (UAV) multispectral imagery could be a powerful tool for the automatic detection of symptomatic vines. However, one major difficulty is to discriminate different kinds of diseases leading to similar leaves discoloration as it is the case with FD and GTD for red vine cultivars. The objective of this paper is to evaluate the potentiality of UAV multispectral imagery to separate: symptomatic vines including FD and GTD (Esca and black dead arm) from asymptomatic vines (Case 1) and FD vines from GTD ones (Case 2). The study sites are localized in the Gaillac and Minervois wine production regions (south of France). A set of seven vineyards covering five different red cultivars was studied. Field work was carried out between August and September 2016. In total, 218 asymptomatic vines, 502 FD vines and 199 GTD vines were located with a centimetric precision GPS. UAV multispectral images were acquired with a MicaSense RedEdge® sensor and were processed to ultimately obtain surface reflectance mosaics at 0.10 m ground spatial resolution. In this study, the potentiality of 24 variables (5 spectral bands, 15 vegetation indices and 4 biophysical parameters) are tested. The vegetation indices are selected for their potentiality to detect abnormal vegetation behavior in relation to stress or diseases. Among the biophysical parameters selected, three are directly linked to the leaf pigments content (chlorophyll, carotenoid and anthocyanin). The first step consisted in evaluating the performance of the 24 variables to separate symptomatic vine vegetation (FD or/and GTD) from asymptomatic vine vegetation using the performance indicators from the Receiver Operator Characteristic (ROC) Curve method (i.e., Area Under Curve or AUC, sensibility and specificity). The second step consisted in mapping the symptomatic vines (FD and/or GTD) at the scale of the field using the optimal threshold resulting from the ROC curve. Ultimately, the error between the level of infection predicted by the selected variables (proportion of symptomatic pixels by vine) and observed in the field (proportion of symptomatic leaves by vine) is calculated. The same methodology is applied to the three levels of analysis: by vineyard, by cultivar (Gamay, Fer Servadou) and by berry color (all red cultivars). At the vineyard and cultivar levels, the best variables selected varies. The AUC of the best vegetation indices and biophysical parameters varies from 0.84 to 0.95 for Case 1 and 0.74 to 0.90 for Case 2. At the berry color level, no variable is efficient in discriminating FD vines from GTD ones (Case 2). For Case 1, the best vegetation indices and biophysical parameter are Red Green Index (RGI)/ Green-Red Vegetation Index (GRVI) (based on the green and red spectral bands) and Car (linked to carotenoid content). These variables are more effective in mapping vines with a level of infection greater than 50%. However, at the scale of the field, we observe misclassified pixels linked to the presence of mixed pixels (shade, bare soil, inter-row vegetation and vine vegetation) and other factors of abnormal coloration (e.g., apoplectic vines). View Full-Text
Keywords: grapevine trunk diseases; Flavescence dorée; disease detection; unmanned aerial vehicle; vegetation indices; biophysical parameters grapevine trunk diseases; Flavescence dorée; disease detection; unmanned aerial vehicle; vegetation indices; biophysical parameters
►▼ Show Figures 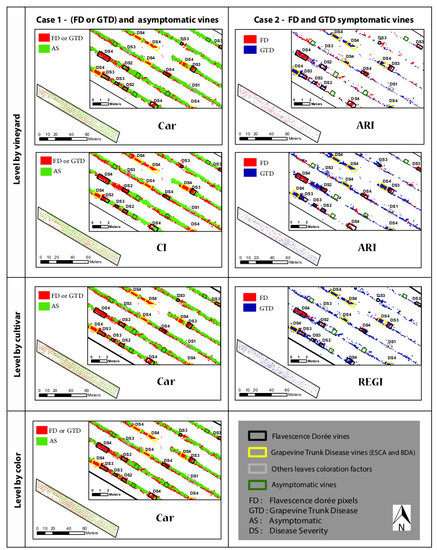