Turbidity, relating to underwater light attenuation, is an important optical parameter for water quality evaluation. Satellite estimation of turbidity in alpine rivers is challenging for common ocean color retrieval models due to the differences in optical properties of the water bodies. In this study, we present a simple two-band semi-analytical turbidity (2BSAT) retrieval model for estimating turbidity in five alpine rivers with varying turbidity from 1.01 to 284 NTU. The model was calibrated and validated, respectively, while using one calibration dataset that was obtained from the Three Parallel Rivers basin and two independent validation datasets that were obtained from the Kaidu River basin and the Yarlung Zangbo River basin. The results show that the model has excellent performance in deriving turbidity in alpine rivers. We verified the consistency of the simulated reflectance and satellite-based reflectance and calibrated the 2BSAT model for the specified bands of high spatial resolution satellites in order to achieve the goal of remote sensing monitoring. It is concluded that the model can be used for the quantitative monitoring of turbidity in alpine rivers using satellite images. Based on the model, we used the Sentinel-2 images from one year to identify the seasonal patterns of turbidity of five alpine rivers and the Landsat series images from 1989 to 2018 to analyze the turbidity variation trends of these rivers. The results indicate that the turbidity of these alpine rivers usually presents the highest level in summer, followed by spring and autumn, and the lowest in winter. Meanwhile, the variation trends of turbidity over the past 30 years present distinctly different characteristics in the five rivers. View Full-Text
Keywords: alpine rivers; remote sensing; turbidity; seasonal patterns; long-term variation alpine rivers; remote sensing; turbidity; seasonal patterns; long-term variation
►▼ Show Figures 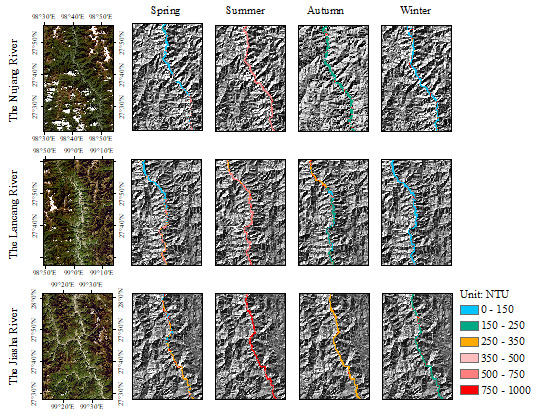