Monitoring and mapping the spatial distribution of winter wheat accurately is important for crop management, damage assessment and yield prediction. In this study, northern and central Anhui province were selected as study areas, and Sentinel-2 imagery was employed to map winter wheat distribution and the results were verified with Planet imagery in the 2017–2018 growing season. The Sentinel-2 imagery at the heading stage was identified as the optimum period for winter wheat area extraction after analyzing the images from different growth stages using the Jeffries–Matusita distance method. Therefore, ten spectral bands, seven vegetation indices (VI), water index and building index generated from the image at the heading stage were used to classify winter wheat areas by a random forest (RF) algorithm. The result showed that the accuracy was from 93% to 97%, with a Kappa above 0.82 and a percentage error lower than 5% in northern Anhui, and an accuracy of about 80% with Kappa ranging from 0.70 to 0.78 and a percentage error of about 20% in central Anhui. Northern Anhui has a large planting scale of winter wheat and flat terrain while central Anhui grows relatively small winter wheat areas and a high degree of surface fragmentation, which makes the extraction effect in central Anhui inferior to that in northern Anhui. Further, an optimum subset data was obtained from VIs, water index, building index and spectral bands using an RF algorithm. The result of using the optimum subset data showed a high accuracy of classification with a great advantage in data volume and processing time. This study provides a perspective for winter wheat mapping under various climatic and complicated land surface conditions and is of great significance for crop monitoring and agricultural decision-making. View Full-Text
Keywords: random forest; feature selection; planet; surface fragmentation random forest; feature selection; planet; surface fragmentation
►▼ Show Figures 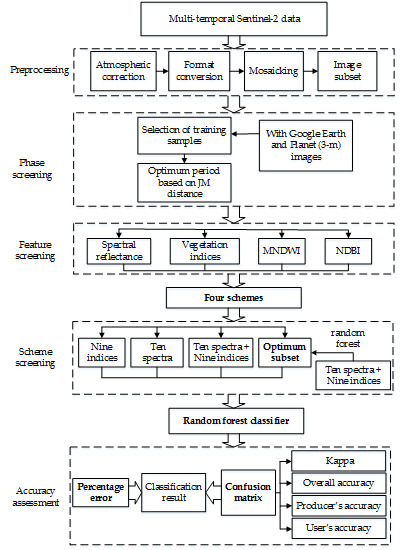