Urban flooding is a major natural disaster that poses a serious threat to the urban environment. It is highly demanded that the flood extent can be mapped in near real-time for disaster rescue and relief missions, reconstruction efforts, and financial loss evaluation. Many efforts have been taken to identify the flooding zones with remote sensing data and image processing techniques. Unfortunately, the near real-time production of accurate flood maps over impacted urban areas has not been well investigated due to three major issues. (1) Satellite imagery with high spatial resolution over urban areas usually has nonhomogeneous background due to different types of objects such as buildings, moving vehicles, and road networks. As such, classical machine learning approaches hardly can model the spatial relationship between sample pixels in the flooding area. (2) Handcrafted features associated with the data are usually required as input for conventional flood mapping models, which may not be able to fully utilize the underlying patterns of a large number of available data. (3) High-resolution optical imagery often has varied pixel digital numbers (DNs) for the same ground objects as a result of highly inconsistent illumination conditions during a flood. Accordingly, traditional methods of flood mapping have major limitations in generalization based on testing data. To address the aforementioned issues in urban flood mapping, we developed a patch similarity convolutional neural network (PSNet) using satellite multispectral surface reflectance imagery before and after flooding with a spatial resolution of 3 meters. We used spectral reflectance instead of raw pixel DNs so that the influence of inconsistent illumination caused by varied weather conditions at the time of data collection can be greatly reduced. Such consistent spectral reflectance data also enhance the generalization capability of the proposed model. Experiments on the high resolution imagery before and after the urban flooding events (i.e., the 2017 Hurricane Harvey and the 2018 Hurricane Florence) showed that the developed PSNet can produce urban flood maps with consistently high precision, recall, F1 score, and overall accuracy compared with baseline classification models including support vector machine, decision tree, random forest, and AdaBoost, which were often poor in either precision or recall. The study paves the way to fuse bi-temporal remote sensing images for near real-time precision damage mapping associated with other types of natural hazards (e.g., wildfires and earthquakes). View Full-Text
Keywords: flood mapping; patch similarity; convolutional neural network; bi-temporal multispectral; deep learning; natural hazards flood mapping; patch similarity; convolutional neural network; bi-temporal multispectral; deep learning; natural hazards
►▼ Show Figures 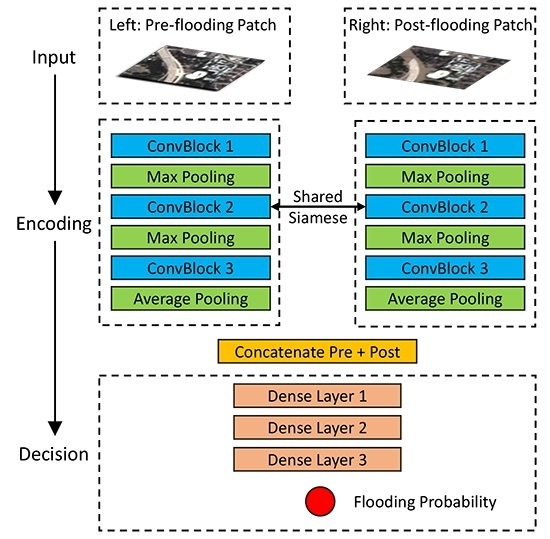