The Qinghai-Tibet Plateau (QTP) is among the most sensitive ecosystems to changes in global climate and human activities, and quantifying its consequent change in land-cover land-use (LCLU) is vital for assessing the responses and feedbacks of alpine ecosystems to global climate changes. In this study, we first classified annual LCLU maps from 2001–2015 in QTP from MODIS satellite images, then analyzed the patterns of regional hotspots with significant land changes across QTP, and finally, associated these trends in land change with climate forcing and human activities. The pattern of land changes suggested that forests and closed shrublands experienced substantial expansions in the southeastern mountainous region during 2001–2015 with the expansion of massive meadow loss. Agricultural land abandonment and the conversion by conservation policies existed in QTP, and the newly-reclaimed agricultural land partially offset the loss with the resulting net change of −5.1%. Although the urban area only expanded 586 km2, mainly at the expense of agricultural land, its rate of change was the largest (41.2%). Surface water exhibited a large expansion of 5866 km2 (10.2%) in the endorheic basins, while mountain glaciers retreated 8894 km2 (−3.4%) mainly in the southern and southeastern QTP. Warming and the implementation of conservation policies might promote the shrub encroachment into grasslands and forest recovery in the southeastern plateau. While increased precipitation might contribute to the expansion of surface water in the endorheic basins, warming melts the glaciers in the south and southeast and complicates the hydrological service in the region. The substantial changes in land-cover reveal the high sensitivity of QTP to changes in climate and human activities. Rational policies for conservation might mitigate the adverse impacts to maintain essential services provided by the important alpine ecosystems. View Full-Text
Keywords: Qinghai-Tibet plateau; land change hotspots; shrub encroachment; reforestation; climatic change Qinghai-Tibet plateau; land change hotspots; shrub encroachment; reforestation; climatic change
►▼ Show Figures 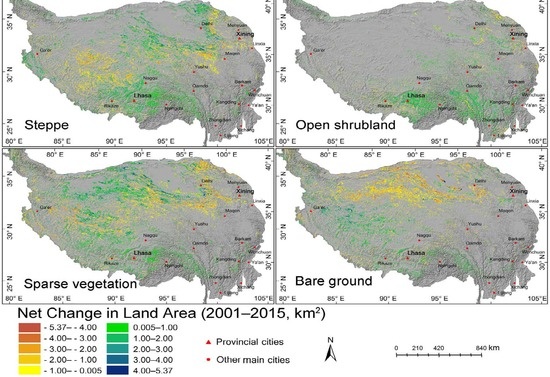