Yield Estimation of Paddy Rice Based on Satellite Imagery: Comparison of Global and Local Regression Models
Previous Article in Journal

Climate related changes can have significant effects on Posidonia oceanica, an endemic seagrass species of the Mediterranean Sea (MEDIT). This seagrass is very important for many aspects of functioning of the sea but there is an increasing number of reports about the ongoing loss of its biomass and area coverage. We analysed multiyear data of the sea surface temperature (SST), sea level anomalies, ocean colour MODIS-A and ERA-Interim reanalysis. The results provide a description of current environmental conditions in the MEDIT and their spatial and temporal variability, including long-term trends. We defined regions where the extent of the P. oceanica meadows may be limited by specific environmental conditions. Light limitation is more severe near the northern and western coasts of the MEDIT, where the vertical diffuse attenuation coefficient is large. In the zone extending from the Gulf of Lion towards the south, significant wave heights reach large values. Wave action may destroy the plants and as a result the shallow water depth limit of P. oceanica meadows is most likely deeper here than in other regions. The highest SST values are documented in the south-eastern part of the Mediterranean Sea. In this area P. oceanica meadows are more endangered by the climate warming than in other regions where SSTs are lower. The absence of P. oceanica meadows in the south-eastern edge of the Mediterranean Sea can be attributed to high temperatures. Our conclusions are partly confirmed by the information about P. oceanica from the literature but more monitoring efforts are needed to fully describe current extent of the meadows and their shifts. Results presented in this paper can help with designing special programs to confirm the role of environmental conditions on the spatial distribution of P. oceanica and their future trends in the Mediterranean Sea. View Full-Text
Keywords: Mediterranean Sea; Posidonia oceanica; environmental conditions; sea surface temperature; significant waves; turbidity; change detection Mediterranean Sea; Posidonia oceanica; environmental conditions; sea surface temperature; significant waves; turbidity; change detection
►▼ Show Figures 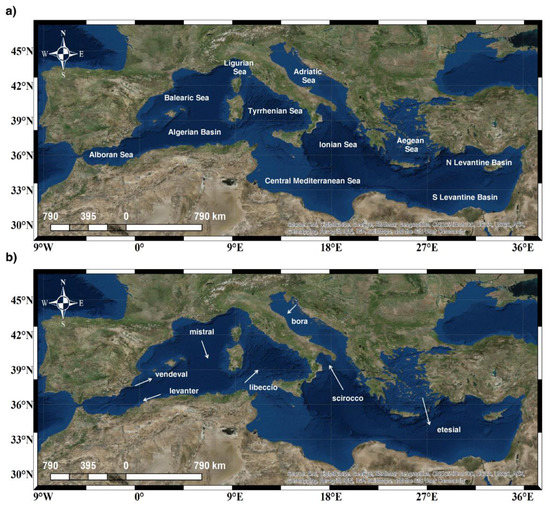