In recent years, UAV technology has developed rapidly. Due to the mobility, low cost, and variable monitoring altitude of UAVs, multiple-object detection and tracking in aerial videos has become a research hotspot in the field of computer vision. However, due to camera motion, small target size, target adhesion, and unpredictable target motion, it is still difficult to detect and track targets of interest in aerial videos, especially in the case of a low frame rate where the target position changes too much. In this paper, we propose a multiple-object-tracking algorithm based on dense-trajectory voting in aerial videos. The method models the multiple-target-tracking problem as a voting problem of the dense-optical-flow trajectory to the target ID, which can be applied to aerial-surveillance scenes and is robust to low-frame-rate videos. More specifically, we first built an aerial video dataset for vehicle targets, including a training dataset and a diverse test dataset. Based on this, we trained the neural network model by using a deep-learning method to detect vehicles in aerial videos. Thereafter, we calculated the dense optical flow in adjacent frames, and generated effective dense-optical-flow trajectories in each detection bounding box at the current time. When target IDs of optical-flow trajectories are known, the voting results of the optical-flow trajectories in each detection bounding box are counted. Finally, similarity between detection objects in adjacent frames was measured based on the voting results, and tracking results were obtained by data association. In order to evaluate the performance of this algorithm, we conducted experiments on self-built test datasets. A large number of experimental results showed that the proposed algorithm could obtain good target-tracking results in various complex scenarios, and performance was still robust at a low frame rate by changing the video frame rate. In addition, we carried out qualitative and quantitative comparison experiments between the algorithm and three state-of-the-art tracking algorithms, which further proved that this algorithm could not only obtain good tracking results in aerial videos with a normal frame rate, but also had excellent performance under low-frame-rate conditions. View Full-Text
Keywords: aerial video; multiple-target tracking; optical-flow-trajectory voting; low frame rate aerial video; multiple-target tracking; optical-flow-trajectory voting; low frame rate
►▼ Show Figures 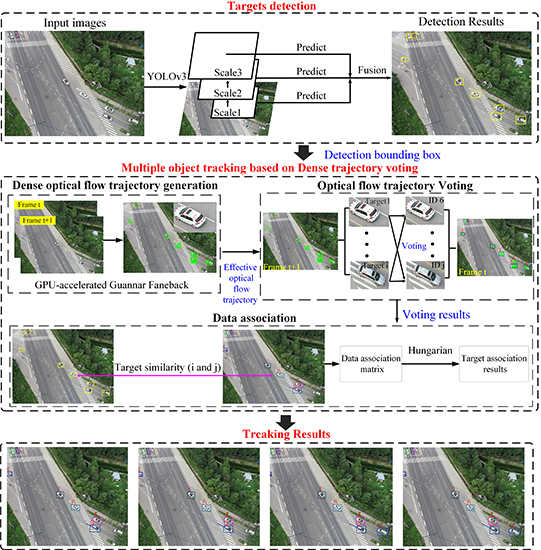