Forest canopy openings are a key element of forest structure, influencing a host of ecological dynamics. Light detection and ranging (LiDAR) is the de-facto standard for measuring three-dimensional forest structure, but digital aerial photogrammetry (DAP) has emerged as a viable and economical alternative. We compared the performance of LiDAR and DAP data for characterizing canopy openings and no-openings across a 1-km2 expanse of boreal forest in northern Alberta, Canada. Structural openings in canopy cover were delineated using three canopy height model (CHM) alternatives, from (i) LiDAR, (ii) DAP, and (iii) a LiDAR/DAP hybrid. From a point-based detectability perspective, the LiDAR CHM produced the best results (87% overall accuracy), followed by the hybrid and DAP models (47% and 46%, respectively). The hybrid and DAP CHMs experienced large errors of omission (9–53%), particularly with small openings up to 20m2, which are an important element of boreal forest structure. By missing these, DAP and hybrid datasets substantially under-reported the total area of openings across our site (152,470 m2 and 159,848 m2, respectively) compared to LiDAR (245,920 m2). Our results illustrate DAP’s sensitivity to occlusions, mismatched tie points, and other optical challenges inherent to using structure-from-motion workflows in complex forest scenes. These under-documented constraints currently limit the technology’s capacity to fully characterize canopy structure. For now, we recommend that operational use of DAP in forests be limited to mapping large canopy openings, and area-based attributes that are well-documented in the literature. View Full-Text
Keywords: LiDAR; photogrammetry; forest structure; forest openings; canopy openings; canopy gaps LiDAR; photogrammetry; forest structure; forest openings; canopy openings; canopy gaps
►▼ Show Figures 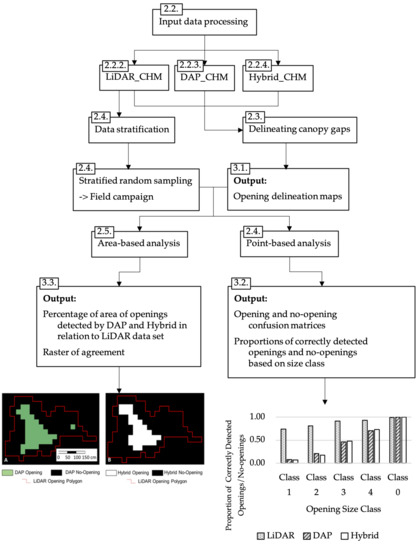