Remote Sensing-Based Assessment of the Crop, Energy and Water Nexus in the Central Valley, California
Previous Article in Special Issue

A variety of environmental analysis applications have been advanced by the use of satellite remote sensing. Smoke detection based on satellite imagery is imperative for wildfire detection and monitoring. However, the commonly used smoke detection methods mainly focus on smoke discrimination from a few specific classes, which reduces their applicability in different regions of various classes. To this end, in this paper, we present a new large-scale satellite imagery smoke detection benchmark based on Moderate Resolution Imaging Spectroradiometer (MODIS) data, namely USTC_SmokeRS, consisting of 6225 satellite images from six classes (i.e., cloud, dust, haze, land, seaside, and smoke) and covering various areas/regions over the world. To build a baseline for smoke detection in satellite imagery, we evaluate several state-of-the-art deep learning-based image classification models. Moreover, we propose a new convolution neural network (CNN) model, SmokeNet, which incorporates spatial and channel-wise attention in CNN to enhance feature representation for scene classification. The experimental results of our method using different proportions (16%, 32%, 48%, and 64%) of training images reveal that our model outperforms other approaches with higher accuracy and Kappa coefficient. Specifically, the proposed SmokeNet model trained with 64% training images achieves the best accuracy of 92.75% and Kappa coefficient of 0.9130. The model trained with 16% training images can also improve the classification accuracy and Kappa coefficient by at least 4.99% and 0.06, respectively, over the state-of-the-art models. View Full-Text
Keywords: smoke detection; wildfire; scene classification; CNN; attention smoke detection; wildfire; scene classification; CNN; attention
►▼ Show Figures 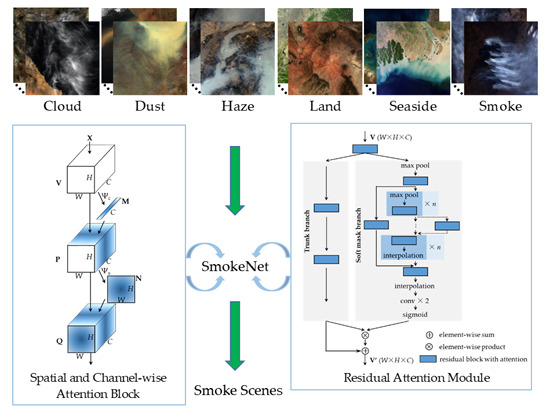