In this study, absorption variation of chromophoric dissolved organic matter (CDOM) was investigated based on spectroscopic measurements of the water surface and bottom during a cruise survey on 2–12 May 2014 in the Pearl River Estuary (PRE). Multiple spectral signatures were utilized, including the absorption ratios E2/E3 (a(250)/a(365)) and E2/E4 (a(254)/a(436))) as well as the spectral slopes over multiple wavelength ranges. The horizontal variations of a(300), E2/E3, spectral slope (S) of Ultraviolet C (SUVC, 250–280 nm), Ultraviolet B (SUVB, 280–315 nm), and S275–295 (275–295 nm) were highly correlated, revealing that CDOM of terrigenous origin in the upper estuary contained chromophores of larger molecular size and weight, while the marine CDOM in the lower estuary comprised organic compounds of smaller molecular size and weight; the molecular size of surface CDOM was generally larger than that at the bottom. Results of Gaussian decomposition methods showed that CDOM in the middle estuary of terrigenous origin produced more Gaussian components per spectrum than those of marine origin in the lower estuary and the adjacent Hong Kong waters. The surface CDOM composition was more diverse than at the bottom, inferred by the finding that the average number of Gaussian components yielded per surface sample (5.44) was more than that of the bottom sample (4.8). A majority of components was centered below 350 nm, indicating that organic compounds with relatively simple structures are ubiquitous in the estuary. Components centered above 350 nm only showed high peaks at the head of the estuary, suggesting that terrigenous CDOM with chromophores in complex structures rapidly lose visible light absorptivity during its transport in the PRE. The relatively low and homogenous peak heights of the components in Hong Kong waters imply higher light stability and composition consistency of the marine CDOM compared with the terrigenous CDOM. View Full-Text
Keywords: CDOM; Pearl River Estuary; light absorption; spectral slope; absorption ratio; Gaussian decomposition CDOM; Pearl River Estuary; light absorption; spectral slope; absorption ratio; Gaussian decomposition
►▼ Show Figures 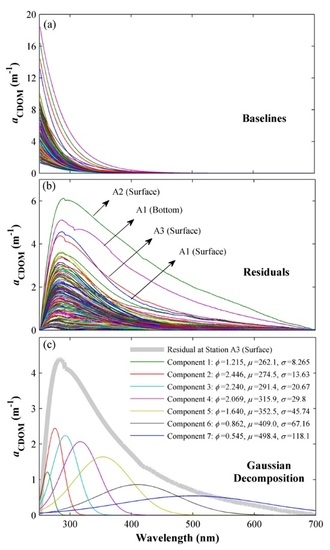