Mediterranean coastal lagoons and their peripheral areas often provide a collection of habitats for many species, and they often face significant threats from anthropogenic activities. Diverse human activities in such areas directly affect the spatio-temporal dynamic of surface water and its ecological characteristics. Monitoring the surface water dynamic, and understanding the impact of human activities are of great significance for coastal lagoon conservation. The Regional Natural Park of Narbonne includes a typical Mediterranean lagoon complex where surface water dynamic and its potential link with local diverse human activities has not yet been studied. In this context, based on all the available Landsat images covering the study area during 2002–2016, this study identified the water and non-water classes for each satellite observation by comparing three widely used spectral indices (i.e., NDVI, NDWI and MNDWI) and using the Otsu method. The yearly water frequency index was then computed to present the spatio-temporal dynamic of surface water for each year, and three water dynamic scenarios were also identified for each year: permanent water (PW), non-permanent water (NPW) and non-water (NW). The spatial and inter-annual variation in the patterns of the three water scenarios were characterized by computing the landscape metrics at scenario-level quantifying area/edge, shape, aggregation and fragmentation. Finally, the quantitative link between different land use and land cover (LULC) types derived from the LULC maps of 2003, 2012 and 2015 and the surface water dynamic scenarios was established in each of the 300 m × 300 m grid cells covering the study area to determine the potential impact of human activities on the surface water dynamic. In terms of the inter-annual variation during 2002–2016, PW presented an overall stability, and NPW occupied only a small part of the water surface in each year and presented an inter-annual fluctuation. NPW had a smaller patch size, with lower connectivity degree and higher fragmentation degree. In terms of spatial variation during 2002–2016, NPW often occurred around PW, and its configurational features varied from place to place. Moreover, PW mostly corresponded to the natural lagoon, and salt marsh (as a part of lagoons), and NPW had a strong link with arable land (agricultural irrigation) and salt marsh (salt production), sand beach/dune, coastal wetlands and lagoon for the LULC maps of 2003, 2012 and 2015. However, more in-depth analysis is required for understanding the impact of sand beach/dune, coastal wetlands and lagoon on surface water dynamics. This study covers the long-term variations of surface water patterns in a Mediterranean lagoon complex having intense and diverse human activities, and the potential link between LULC types and the water dynamic scenarios was investigated on different dates. The results of the study should be useful for environmental management and protection of coastal lagoons. View Full-Text
Keywords: Mediterranean lagoon complex; surface water dynamic; land use and land cover; landscape metrics; remote sensing Mediterranean lagoon complex; surface water dynamic; land use and land cover; landscape metrics; remote sensing
►▼ Show Figures 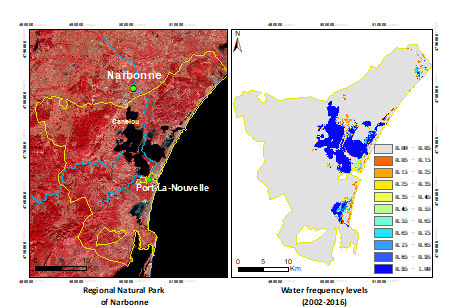