:
Ground-based synthetic aperture radar (GBSAR) systems are popular remote sensing instruments for detecting the ground changes of landslides, glaciers, and open pits as well as for detecting small displacements of large structures, such as bridges and dams. Recently (2017), a novel mono/bistatic GBSAR configuration was proposed to acquire two different components of displacement of the targets in the field of view. This bistatic configuration relies on a transponder that consists—in its basic implementation—of just two antennas and an amplifier. The aim of this article was to design and experimentally test an improved transponder with cross-polarized antennas and frequency shifter that is able to prevent possible oscillations even at very high gain, as required in long-range applications. The transponder was successfully field-tested, and its measured gain was 91 dB gain.
Keywords:
bistatic radar; cross-polarization; frequency shifter; synthetic aperture radar; transponder

Ground-based synthetic aperture radar (GBSAR) systems are popular remote sensing instruments for detecting the ground changes of landslides [1], glaciers [2], and open pits [3] as well as for detecting small displacements of large structures, such as bridges [4] and dams [5]. These radars are able to provide displacement maps but have a major limitation: They only detect the displacement component along the range direction. Recently, in a piece published in the IEEE Geoscience and Remote Sensing Letters [6], the authors of this paper proposed a novel mono/bistatic GBSAR configuration for retrieving two components of the displacement vector using a transponder. The transponder proposed in that paper consisted of two co-polarized horn antennas and an amplifier. However, this solution had two possible problems: (1) The gain is limited by the poor isolation between the two co-pol antennas operating at the same frequency. (2) As monostatic and bistatic signals are in the same polarization and in the same frequency, large targets behind the transponder can give monostatic signals mixed to bistatic signals that produce artifacts in the bistatic image [6].
The aim of this article is to propose an enhanced transponder that is able to operate at very high gain without triggering self-oscillations. It has the following features: (1) the transmitting and receiving antennas are cross-polarized, and (2) a frequency shifter decouples the transmitted and received signals of the transponder.

2.2. The Cross-Pol Transponder with Frequency Shifter

As described in Reference [6], the simplest transponder consists of only two antennas and an amplifier. However, a major problem of any transponder is its possible oscillation. In particular, the isolation between the two antennas has to be higher than the gain in order to avoid the oscillation.
A way to increase the isolation between two linearly polarized antennas is to rotate one of them by 90°. For real antennas, the cross-polarization can provide an isolation of 20–30 dB in addition to the co-polarized isolation (see for example Reference [8]). In the specific case of the transponder described above, the cross-polarization of the antenna pointing at the radar does not affect the bistatic operation if the second receiving antenna of the radar head is cross-polarized with respect to the transmitting antenna (see Figure 2). A further advantage of the cross-polarization is that monostatic and bistatic signals have different polarizations, so possible artifacts (described in Reference [6]) due to the mixing of bistatic and monostatic signals are greatly mitigated.
Another effective way to avoid the oscillation of a high gain transponder is to shift the output frequency using a suitable frequency shifter. Figure 3 shows the scheme of a bistatic radar that uses a transponder with frequency shifter. The radar operates at central frequency f0. The transponder has its own local oscillator (LO). A mixer and a high-pass filter operates as upconverter and shift the central frequency, so the frequency of the signal transmitted from the transponder to the radar head is f0 + fLO. In the radar head, a downconverter (a mixer and a low-pass filter) brings the signal back to frequency f0. The two LOs have to be coherent and synchronized, so a reference signal at low frequency fREF is shared with a cable. As the cable could move during the movement of the radar head along its mechanical guide, a calibration path is necessary to compensate possible phase shift of the reference signal. Moreover, the calibration provides long-term phase stability and compensates possible phase changes that can occur when the equipment is switched off and on again. Therefore, the radar head has a second transmit channel (selected by a Radio Frequency switch) that provides a calibration signal directly transmitted to the transponder. The transponder has two receiving antennas (one pointed at the target and the other one pointed at the radar). A RF switch, controlled by a Wi-Fi device, selects between the two antennas (measurement and calibration).

Figure 4 shows the implementation of a upconverter realized with a mixer (SPECWAVE MM96P-L15), a LO at 2.0 GHz (HP 8672A), and a high-pass RF filter (FILTRONIC SB 029). Two band-pass filters (MINICIRCUITS VHF-3800+ and FBP-5.8-11G tuned in the band 5.8 GHz–10.1 GHz) are used for limiting the input band.
The isolation of the transponder with the upconverter was measured with the test bench depicted in Figure 5.
Figure 6 shows the amplitude plot in frequency of the signal before the upconverter (“direct path” in Figure 6) and after. The minimum isolation resulted in 71.90 dB, which was enough to prevent the oscillation of an amplifier with gain up to 50–60 dB.
The upconverter requires a downconverter at the radar head. In order to test the capability of the up- and downconverters to correctly detect the phase of the radar signal, we implemented the test bench shown in Figure 7. In order to simulate the measured differential phase of a target, we inserted a manual phase shifter (ARRA 9428B) between the Vector Network Analyzer (VNA) and the upconverter. The two signal generators at 2.0 GHz were locked up with a 50 m coaxial cable that shared the 10 MHz reference signal.
Figure 8 shows the phase measured when the signal passes through the up- and downconverters and the phase measured directly (bypassing the up- and downconverters). The x-axis represents the marker number of the manual roll of the phase shifter (ARRA 9428B).
Figure 9 shows the plot of the differences. The average difference was 2.78 deg. This difference appears to be a systematic error (probably due to nonideality of the mixers and filters), which is compensated by the calibration procedure and which cannot anyway affect the differential measurement of the targets’ displacements in any case.

In this paper, the authors designed and tested a high gain (91 dB) transponder for operating a GBSAR in bistatic modality. This high gain was obtained by decoupling the transmit and receiving channels by cross-polarization and frequency shift. As the radar needs phase stability both for providing the synthetic aperture and for operating as an interferometer, it was necessary to share the reference signal using a cable and to provide a calibration path between the transponder and the radar head. This solution can possibly be problematic for long-range deployment of the equipment. In order to avoid the cable, a lock-in module in the transponder could use the calibration signal as reference signal; however, this obviously adds further hardware complexity. An alternative solution that can be investigated in future works is to synchronize radar and transponder using the same clock provided by a GPS constellation.
Compared to the transponder reported in Reference [6], this transponder is fairly more complex and expensive; nevertheless, it is able to obtain a gain (91 dB) that is not achievable otherwise. Therefore, we can state that this enhanced transponder is specially designed for long-range applications where very high gain is required.

The bistatic GBSAR with transponder (with and without frequency shifter) has been patented by one of the authors, and the University of Florence has the property. Patent number: n. 102016000102764 filed, 13 October 2016.

M.P. has patented the bistatic GBSAR through transponder. 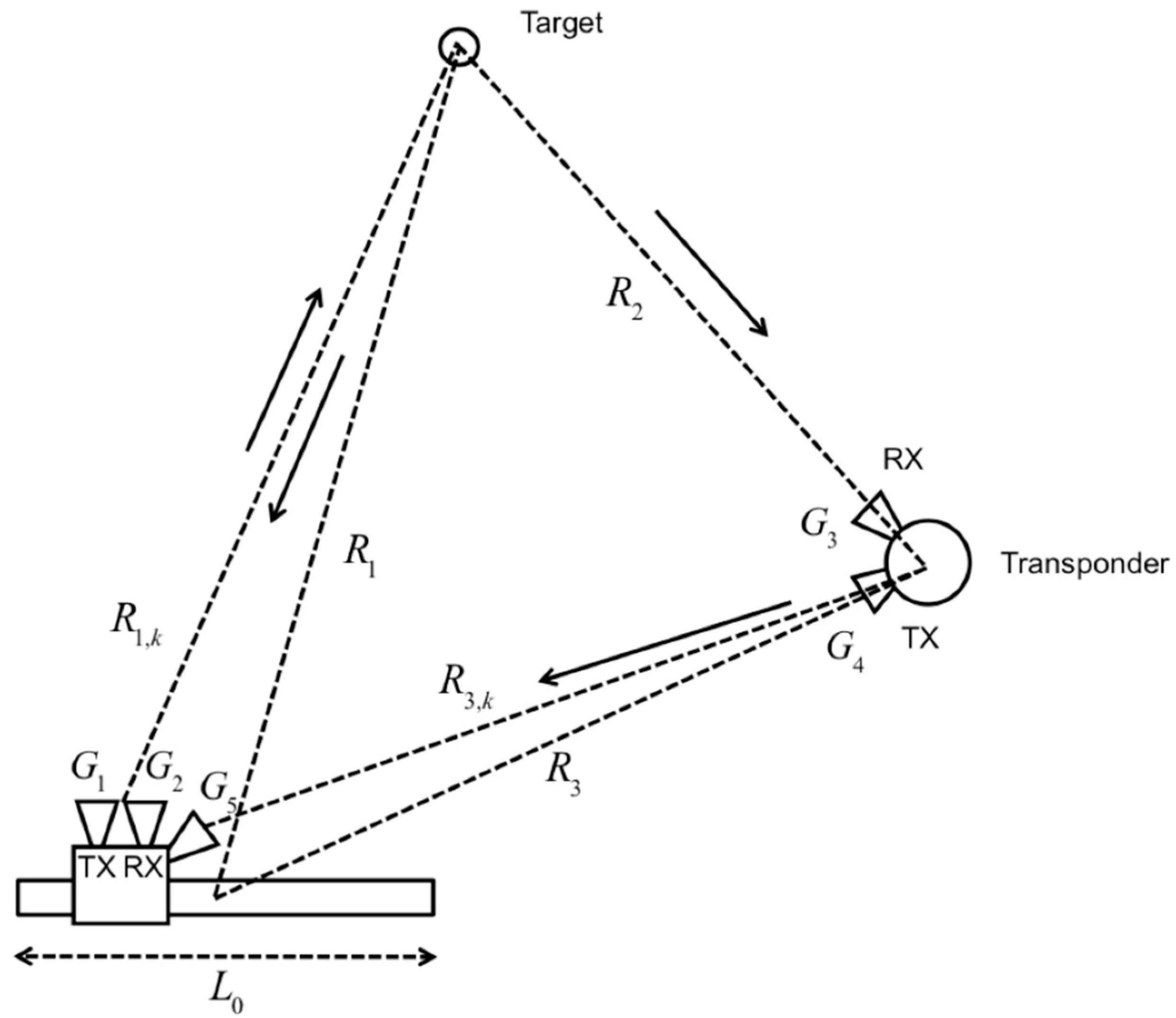 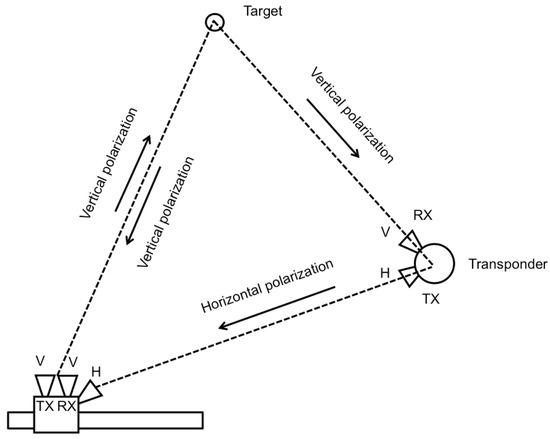 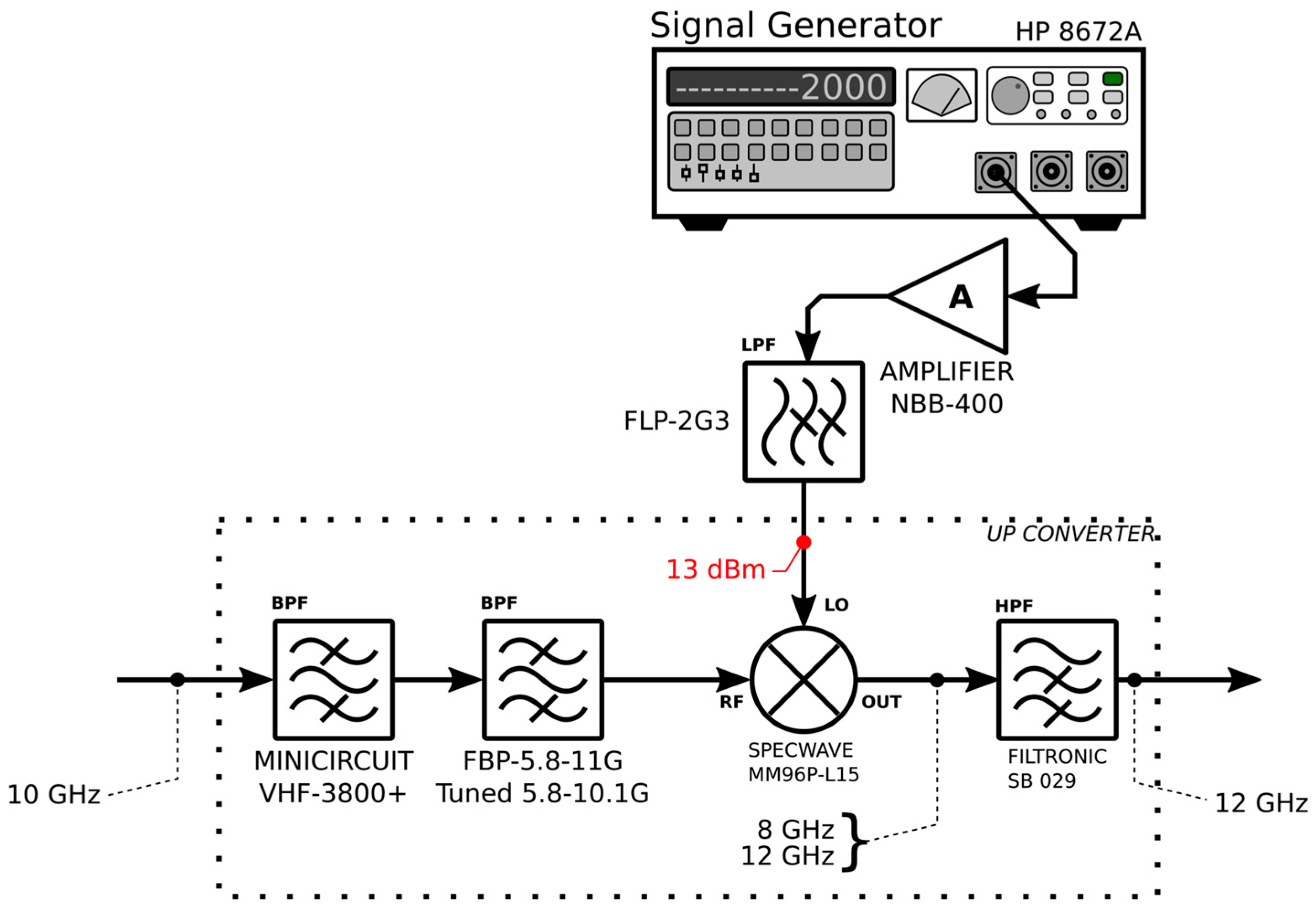 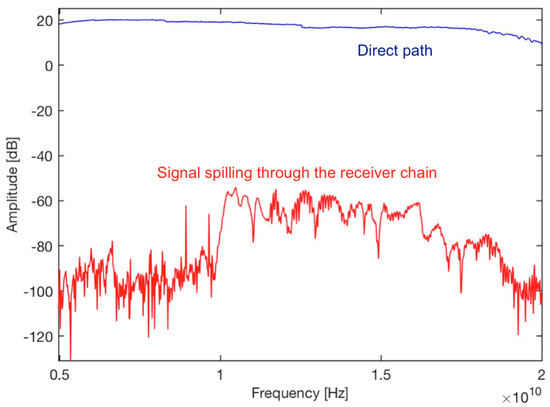 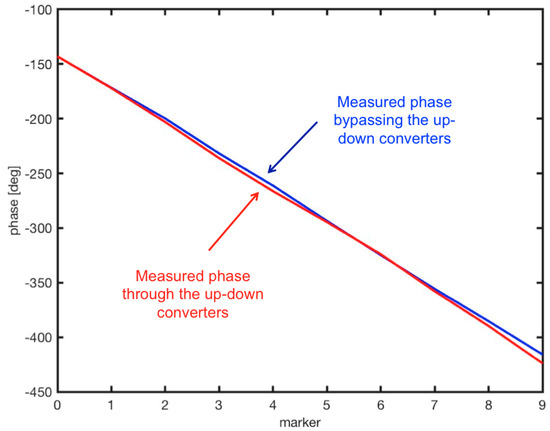 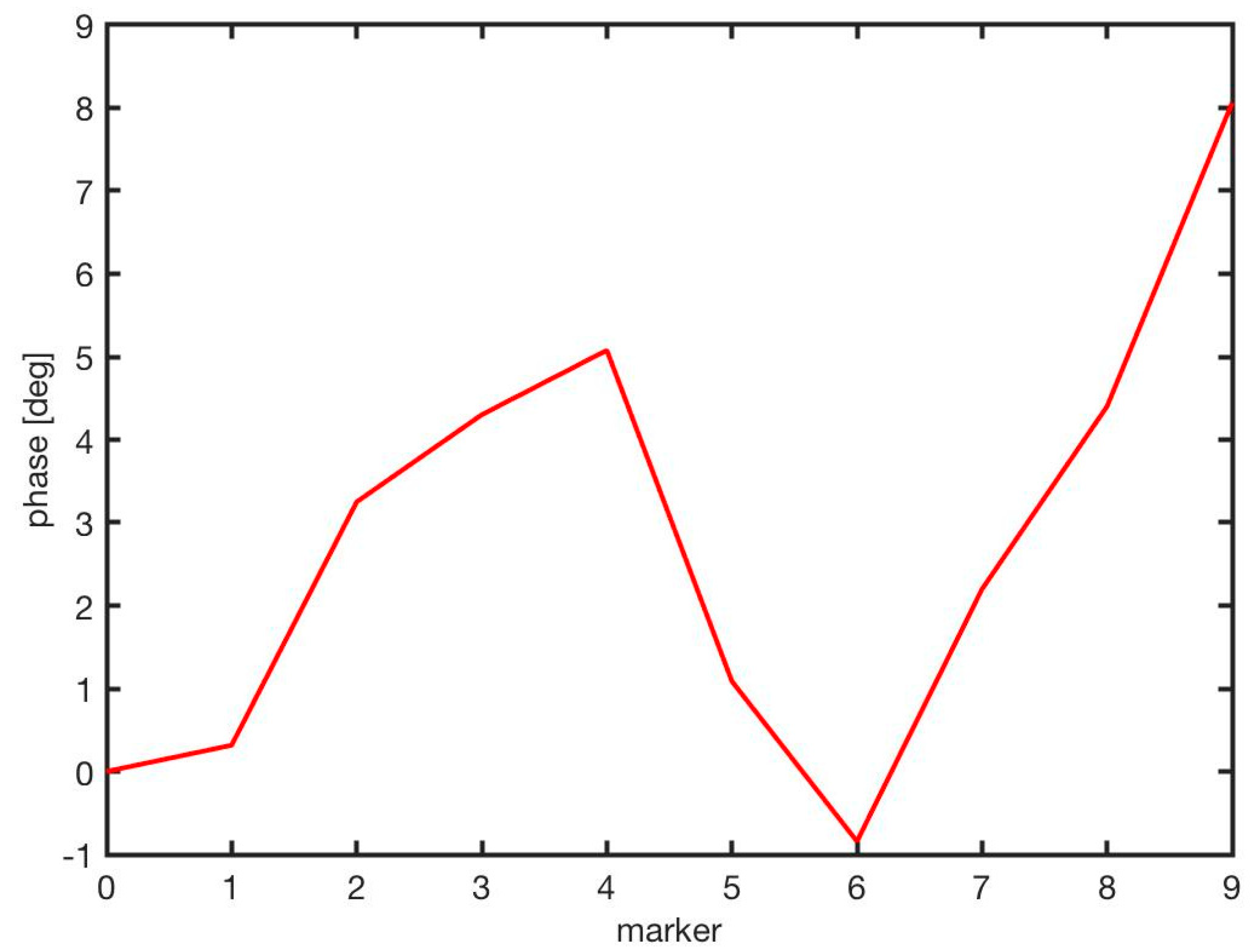 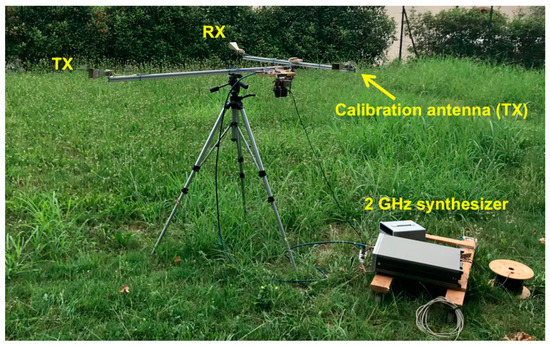 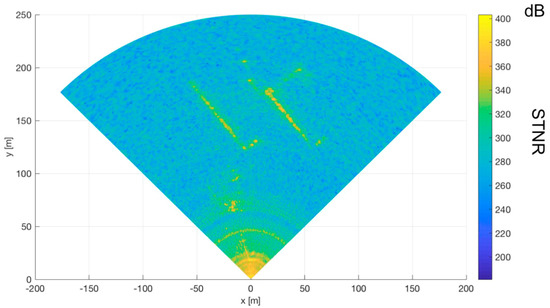 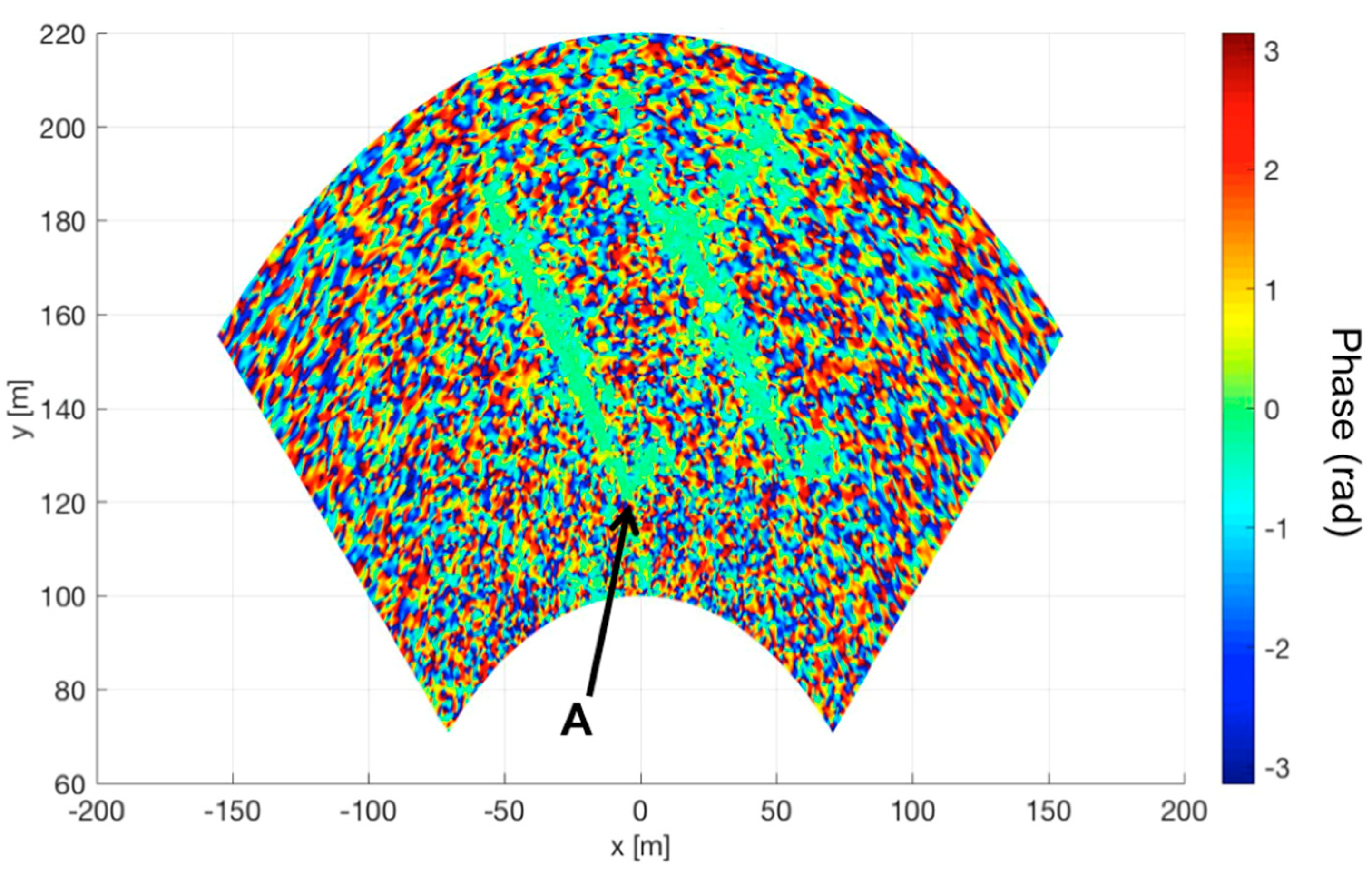 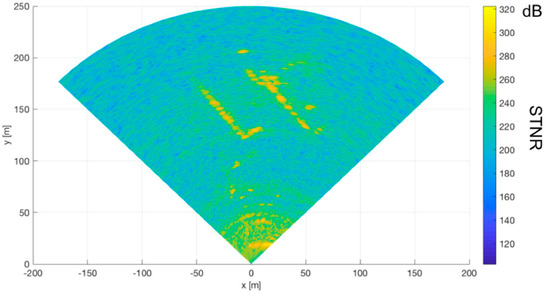 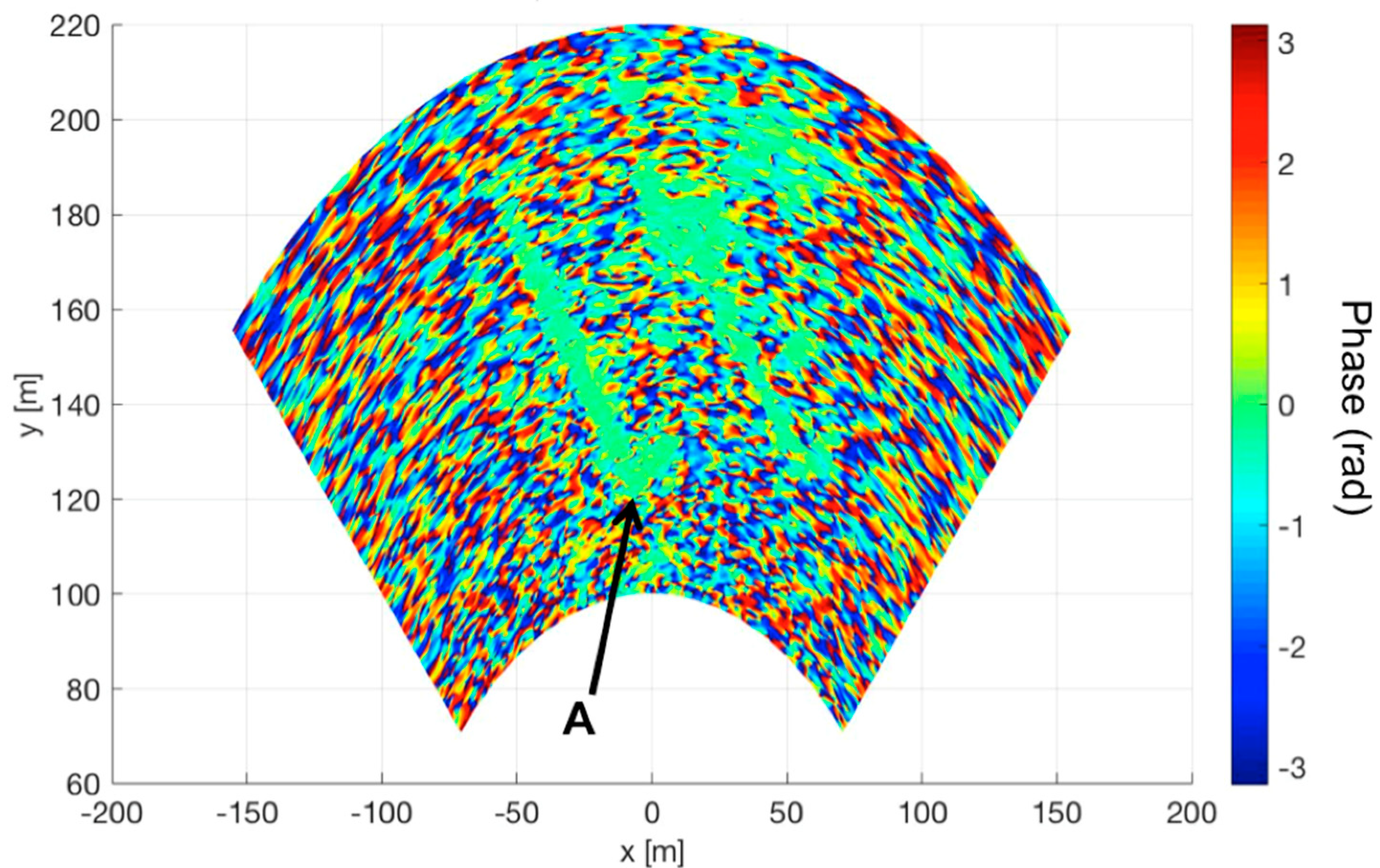 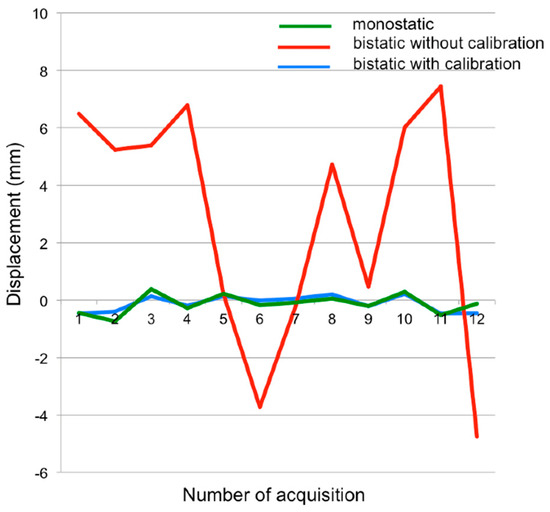