2. Study Area and the Precipitation Products

This study focuses on two gauge-scarce river basins on the TP: the source regions of the Yellow River (UYE) and Yangtze River (UYA) basins (Figure 1). The two basins are located on the northern TP and have large spatial heterogeneities in the terrain and climate within each basin. The UYE and UYA cover areas of 121,972 km2 and 137,704 km2, respectively. The total area of the two basins accounts for ~10.4% of the TP. The elevations of the two basins range from 2776 to 6313 m a.s.l. The climate conditions of the two basins are mainly dominated by the Asian monsoon [49]. The annual mean precipitation decreases as the latitude increases, and more than 70% of the precipitation occurs during the wet season (from May to September). The two basins have long-term daily streamflow records, allowing us to evaluate the capacity of hydrological modeling for different satellite precipitation products. The distribution of the meteorological stations in the two basins is very sparse and uneven. There are only four and nine stations located in the UYA and the UYE basins, respectively (Figure 1). Thus, it is difficult to characterize the realistic spatial–temporal variability in precipitation by using the interpolated precipitation data from gauge observations.
The daily streamflow records were obtained from the Hydrological Bureau of the Ministry of Water Resources of China. The daily meteorological data come from 21 national meteorological stations, which have been subject to strict quality control by the China Meteorological Administration (CMA) (http://data.cma.cn/).

Model choices may influence the results of a hydrological evaluation. Compared with a lumped model, a distributed hydrological model can reflect the influences of spatial variability in precipitation on hydrological simulations and thus is more sensitive to the errors in precipitation inputs than a lumped model [59]. Here, the hydrological evaluation was performed via a grid-based distributed hydrological model, namely, the Hydro-Informatic Modeling System (HIMS) [10,60,61]. The HIMS model is a conceptual, process-based hydrological model that includes key hydrological processes in both the vertical and horizontal directions, including snow accumulation melt, evaporation from soil and plants, infiltration, water exchange between soil layers, and groundwater recharge and baseflow (Figure 2). The model runs on a daily scale and has a variable spatial resolution. The current version of the HIMS incorporates a temperature-based snow-accounting model, namely, CemaNeige [62], to calculate the snow accumulation and melt. The CemaNeige model has been compared with six other snow-accounting models on a large set of catchments and exhibited the best performance [62]. The HIMS model uses a physical-based Peman–Monteith (PM) equation to calculate the evaporation from soil and plants. Multiple forms of the PM equation have been developed, and the difference between them lies mainly in how to parameterize the surface conductance (i.e., the inverse of the surface resistance). In the HIMS model, the surface conductance formula developed by Leuning, et al. [63] was used, which has been reported to be superior to the empirical evaporation equation for hydrological modeling [64,65]. The model includes three runoff components: surface runoff, interflow, and baseflow. The surface runoff is calculated using a power-function infiltration equation. This equation contains both infiltration excess and saturation excess runoff mechanisms and has wide applicability [66]. The interflow and baseflow are computed via the linear reservoir method. The model has two interconnected storage units that contribute to the vertical water transfer balance: an unsaturated layer and a saturated layer. The interactions between the unsaturated and saturated layers are represented by a moving boundary in response to the groundwater storage dynamics. The horizontal water transfer is calculated based on a unit-based routing equation. The HIMS model includes 12 free parameters, which are calibrated using the observed streamflow data based on a Monte-Carlo-based calibration method [67]. The model was calibrated for each precipitation product using 10,000 parameter sets from the Monte Carlo random sampling. The observed streamflow data from 1998 to 2005 were used for the calibration, and the data from 2006 to 2012 were used for validation. The forcing data of the HIMS model mainly include the conventional meteorological variables (precipitation, temperature, relative humidity, wind speed, and sunshine duration) and land surface information (digital elevation model (DEM), land use data, leaf area index (LAI)).

A point-to-pixel validation was performed for the five precipitation products using the daily precipitation observations from 21 meteorological stations (see Figure 1). The results are shown in Figure 6 with boxplots and Table 2. The precipitation products and gauge observations show poor linear correlations: the CC values for all products are below 0.50 at the 21 station sites. Overall, MSWEP performs better than the other products, with a median CC = 0.32, while the median CC values for the other products are similar to each other, ranging from 0.17 to 0.18. In terms of the PBIAS, CHIRPS performs the best, followed by TMPA 3B42 and MSWEP. PERSIANN-CDR tends to overestimate precipitation compared to the gauge observations, with a median PBIAS = −11.3%, whereas the CMORPH precipitation shows systematic underestimations, with a median PBIAS = 4.5%. These products show the same performance rankings in RMSE and KGE metrics: MSWEP has the highest rank, followed by CMORPH, TMPA 3B42, CHIRPS, and PERSIANN-CDR. Overall, all products cannot efficiently reproduce the temporal variability in the gauge precipitation at the daily scale. Among the five products, MSWEP has the best consistency with the gauge observations, achieving the best performance in three out of the four metrics.

5.1. Validation of the Satellite Precipitation Products

P.B. performed the research design, analyzed the data and wrote the draft; X.L. edited the draft and provided constructive suggestions to improve the paper.

The authors appreciate all the providers of precipitation products to allow us download the precipitation datasets for free; we would also like to thank the reviewers and editors who provided valuable comments and suggestions for this paper. 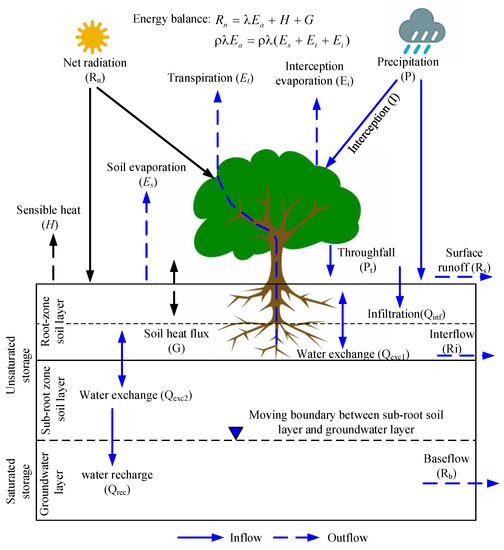 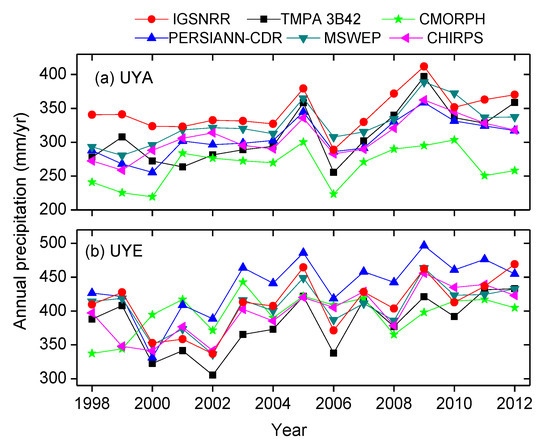 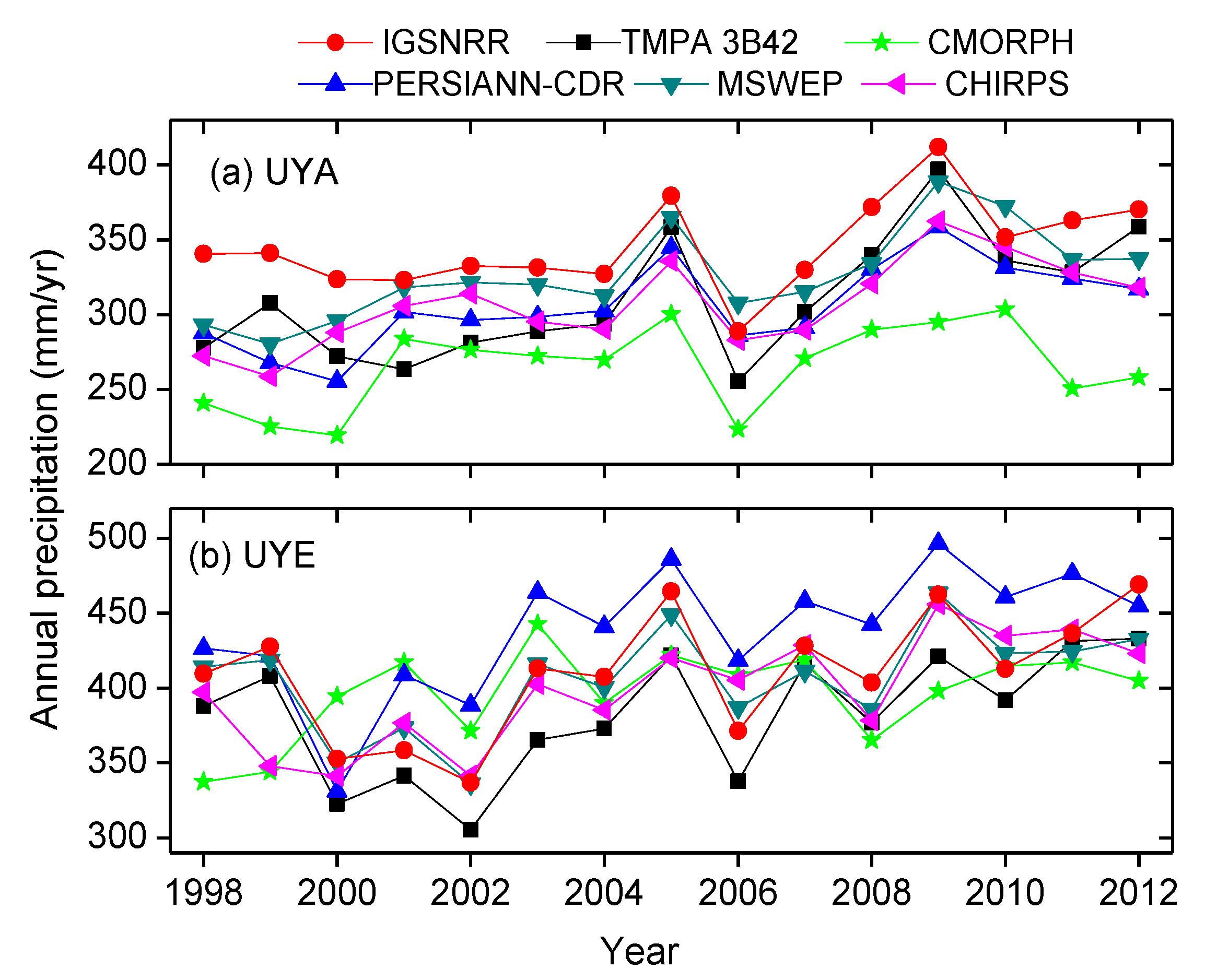 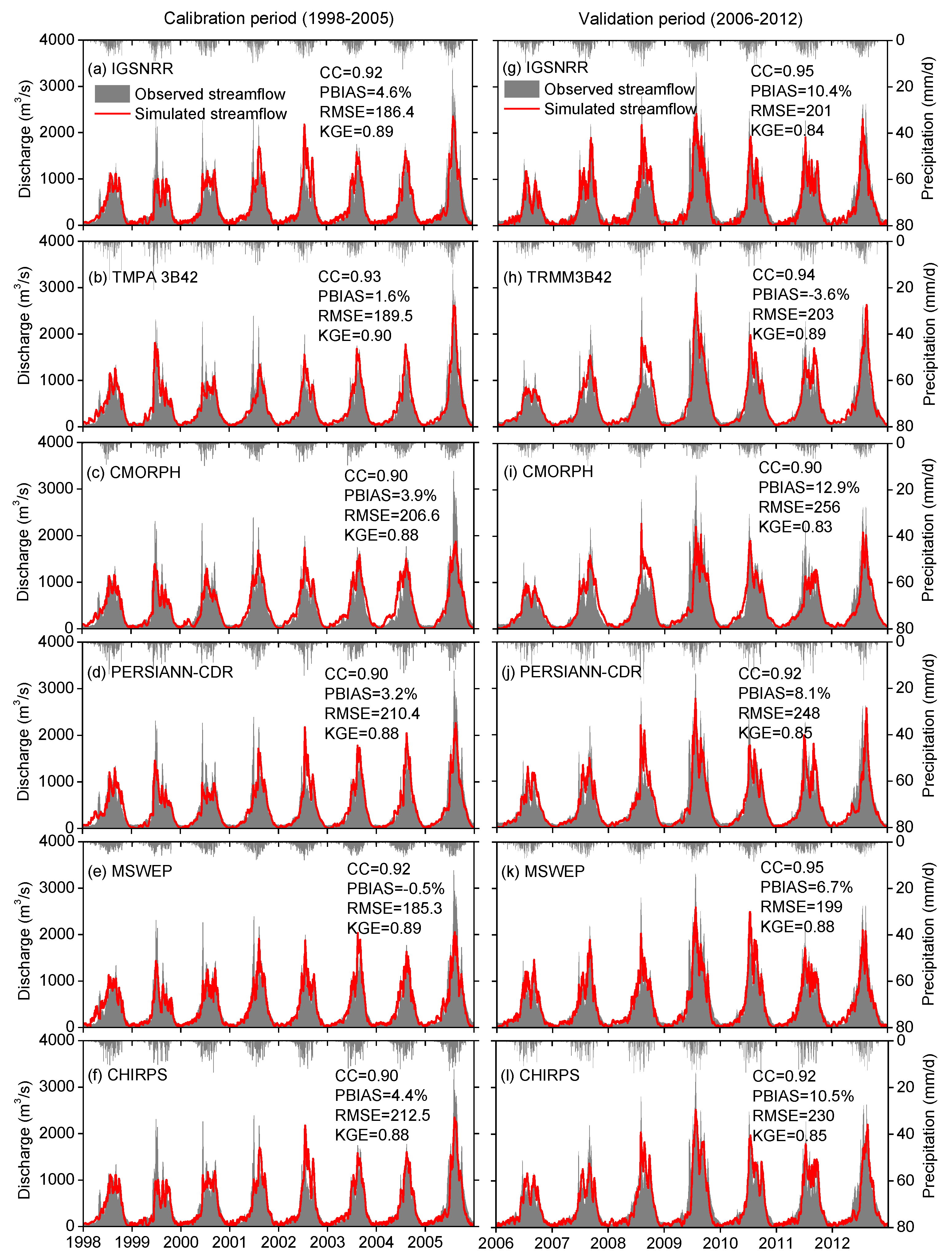 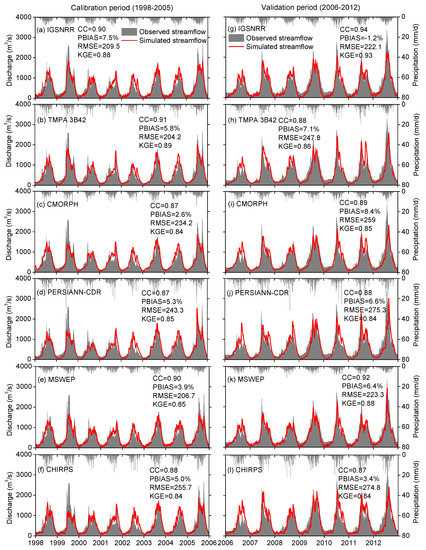 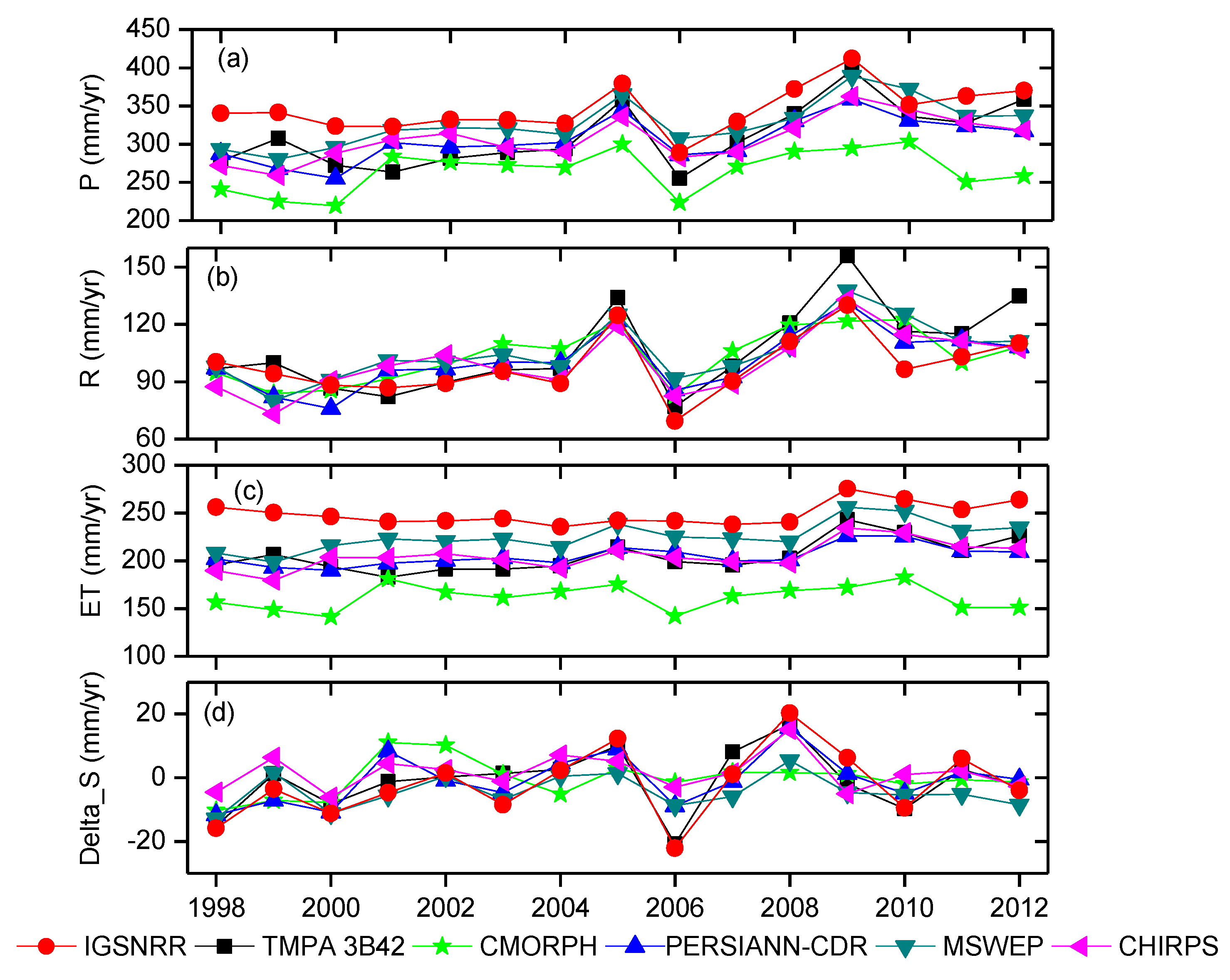 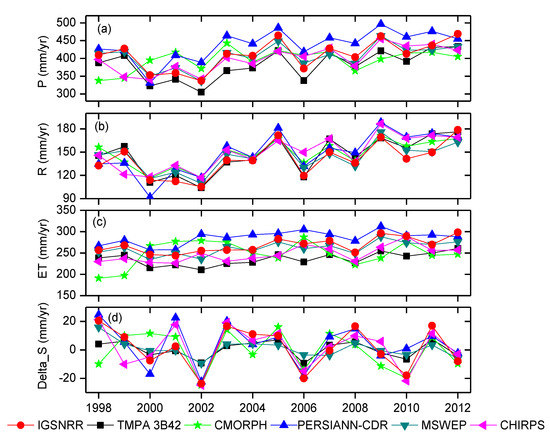 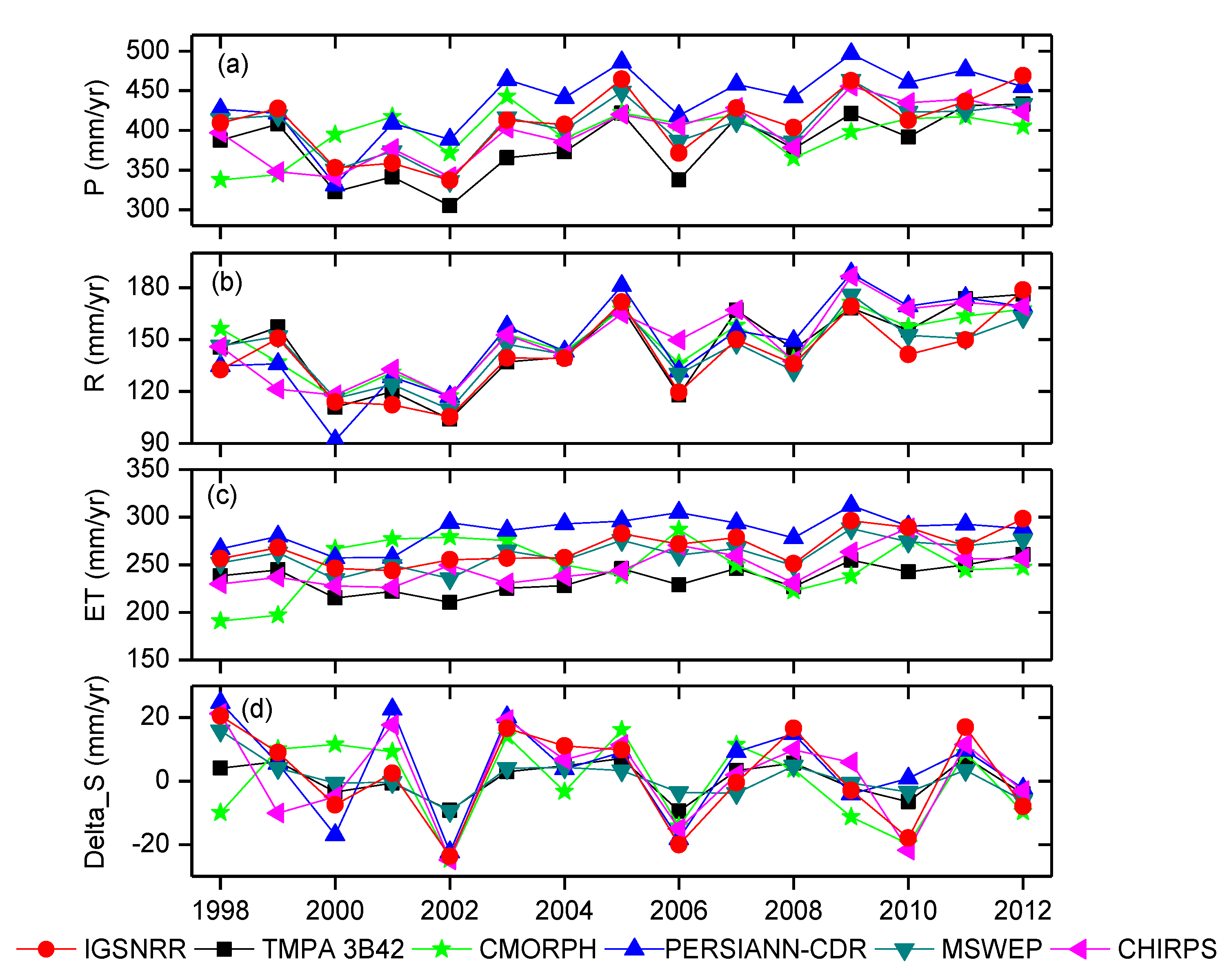 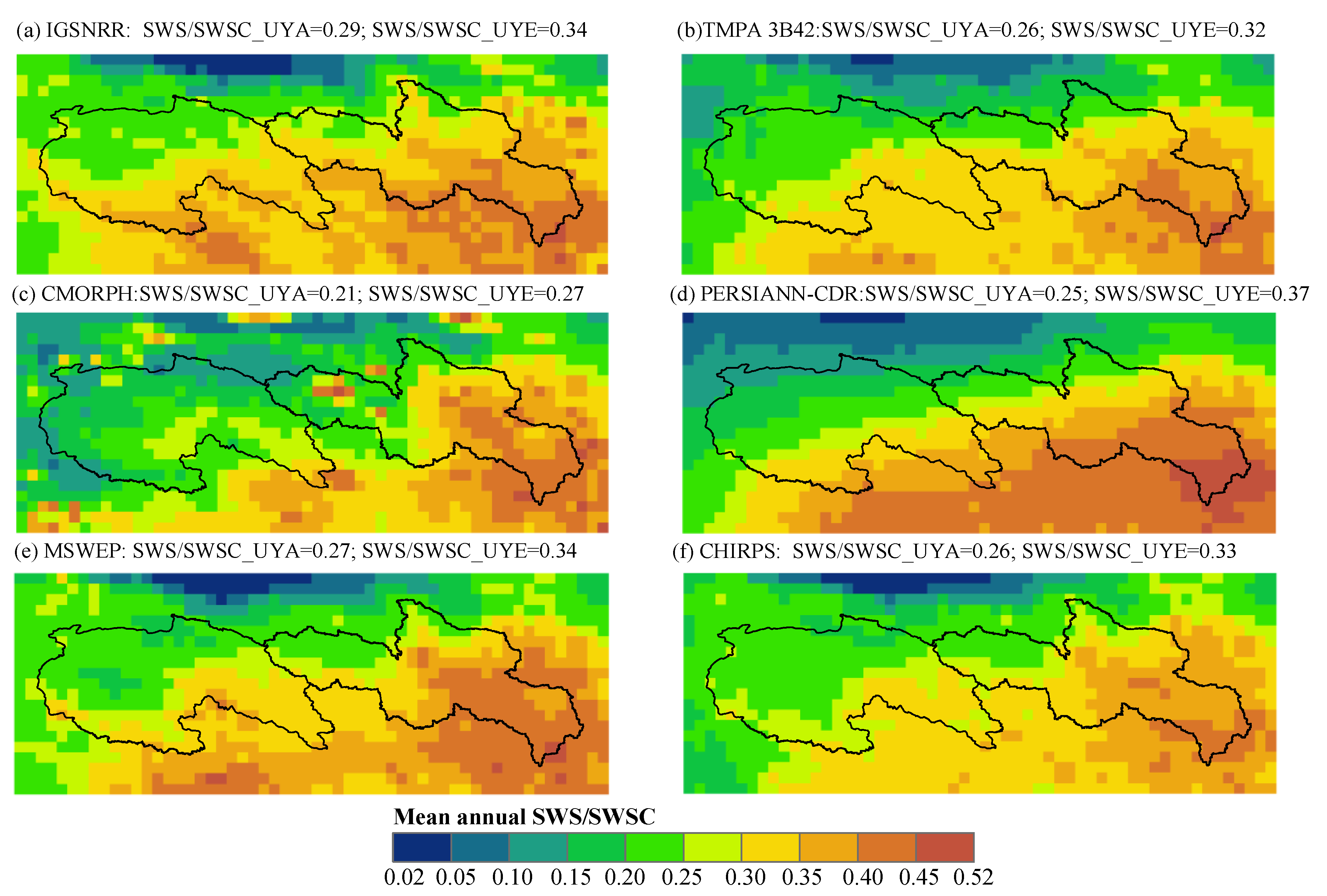