InSAR Reveals Land Deformation at Guangzhou and Foshan, China between 2011 and 2017 with COSMO-SkyMed Data

Subsidence from groundwater extraction and underground tunnel excavation has been known for more than a decade in Guangzhou and Foshan, but past studies have only monitored the subsidence patterns as far as 2011 using InSAR. In this study, the deformation occurring during the most recent time-period between 2011 and 2017 has been measured using COSMO-SkyMed (CSK) to understand if changes in temporal and spatial patterns of subsidence rates occurred. Using InSAR time-series analysis (TS-InSAR), we found that significant surface displacement rates occurred in the study area varying from −35 mm/year (subsidence) to 10 mm/year (uplift). The 2011–2017 TS-InSAR results were compared to two separate TS-InSAR analyses (2011–2013, and 2013–2017). Our CSK TS-InSAR results are in broad agreement with previous ENVISAT results and levelling data, strengthening our conclusion that localised subsidence phenomena occurs at different locations in Guangzhou and Foshan. A comparison between temporal and spatial patterns of deformations from our TS-InSAR measurements and different land use types in Guangzhou shows that there is no clear relationship between them. Many local scale deformation zones have been identified related to different phenomena. The majority of deformations is related to excessive groundwater extraction for agricultural and industrial purposes but subsidence in areas of subway construction also occurred. Furthermore, a detailed analysis on the sinkhole collapse in early 2018 has been conducted, suggesting that surface loading may be a controlling factor of the subsidence, especially along the road and highway. Roads and highways with similar subsidence phenomenon are identified. Continuous monitoring of the deforming areas identified by our analysis is important to measure the magnitude and spatial pattern of the evolving deformations in order to minimise the risk and hazards of land subsidence. View Full-Text
Keywords: subsidence; Persistent Scatterer Interferometry; TS-InSAR; Guangzhou; Foshan subsidence; Persistent Scatterer Interferometry; TS-InSAR; Guangzhou; Foshan
►▼ Show Figures 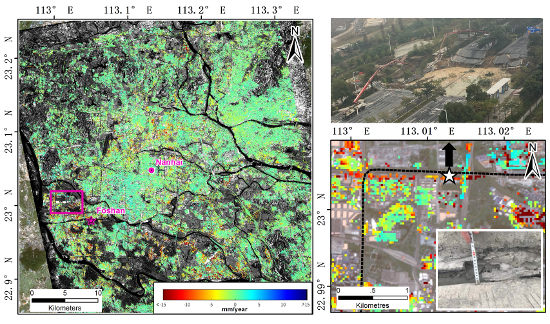