El Niño-Southern Oscillation related signals (ENSORS) in the troposphere and lower stratosphere (TLS) are the prominent source of inter-annual variability in the weather and climate system of the Earth, and are especially important for monitoring El Niño-Southern Oscillation (ENSO). In order to reduce the influence of quasi-biennial oscillations and other unknown signals compared with the traditional empirical orthogonal functions (EOF) method, a new processing strategy involving fusion of a low-pass filter with an optimal filtering frequency (hereafter called the optimal low-pass filter) and EOF is proposed in this paper for the extraction of ENSORS in the TLS. Using this strategy, ENSORS in the TLS over different areas were extracted effectively from the specific humidity profiles provided by the Global Navigation Satellite System (GNSS) radio occultation (RO) of the Constellation Observing System for Meteorology, Ionosphere, and Climate (COSMIC) mission from June 2006 to June 2014. The spatial and temporal responses of the extracted ENSORS to ENSO at different altitudes in the TLS were analyzed. The results show that the most suitable areas for extracting ENSORS are over the areas of G25 (−25°S–25°N, 180°W–180°E) −G65(−65°S–65°N, 180°W–180°E) in the upper troposphere (250–200 hpa) which show a lag time of 3 months relative to the Oceanic Niño index (ONI). In the troposphere, ENSO manifests as a major inter-annual variation. The ENSORS extracted from the N3.4 (−5°S to 5°N, 120°W to 170°W) area are responsible for 83.59% of the variability of the total specific humidity anomaly (TSHA) at an altitude of 250 hpa. Over all other defined areas which contain the N3.4 areas, ENSORS also explain the major variability in TSHA. In the lower stratosphere, the extracted ENSORS present an unstable pattern at different altitudes because of the weak ENSO effect. Moreover, the spatial and temporal responses of ENSORS and ONI to ENSO across the globe are in good agreement. Over the areas with strong correlation between ENSORS and ONI, the larger the correlation coefficient is, the shorter the lag time between them. Furthermore, the ENSORS from zonal-mean specific humidity monthly anomalies at different altitudes can clearly present the vertical structure of ENSO in the troposphere. This study provides a new approach for monitoring ENSO events. View Full-Text
Keywords: optimal low-pass filtering; ENSORS; specific humidity; COSMIC; GNSS RO optimal low-pass filtering; ENSORS; specific humidity; COSMIC; GNSS RO
►▼ Show Figures 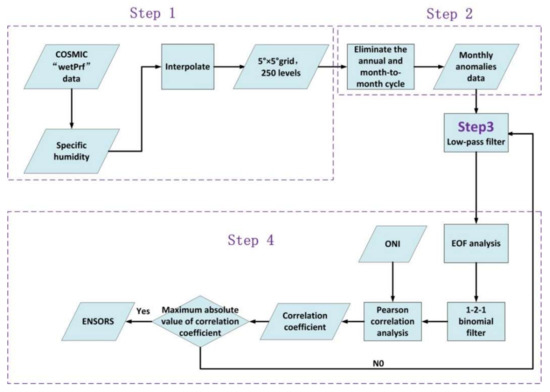