Advanced processing of collected global navigation satellite systems (GNSS) observations allows for the estimation of zenith tropospheric delay (ZTD), which in turn can be converted to the integrated water vapour (IWV). The proper estimation of GNSS IWV can be affected by the adopted GNSS processing strategy. To verify which of its elements cause deterioration and which improve the estimated GNSS IWV, we conducted eight reprocessings of 20 years of GPS observations (01.1996–12.2015). In each of them, we applied a different mapping function, the zenith hydrostatic delay (ZHD) a priori value, the cut-off angle, software, and the positioning method. Obtained in such a way, the ZTD time series were converted to the IWV using the meteorological parameters sourced from the ERA-Interim. Then, based on them, the long-term parameters were estimated and compared to those obtained from the IWV derived from the radio sounding (RS) observations. In this paper, we analyzed long-term parameters such as IWV mean values, linear trends, and amplitudes of annual and semiannual oscillations. A comparative analysis showed, inter alia, that in terms of the investigation of the IWV linear trend the precise point positioning (PPP) method is characterized by higher accuracy than the differential one. It was also found that using the GPT2 model and the higher elevation mask brings benefits to the GNSS IWV linear trend estimation. View Full-Text
Keywords: global navigation satellite systems; integrated water vapour; processing strategies; linear trends; radio soundings; climate global navigation satellite systems; integrated water vapour; processing strategies; linear trends; radio soundings; climate
►▼ Show Figures 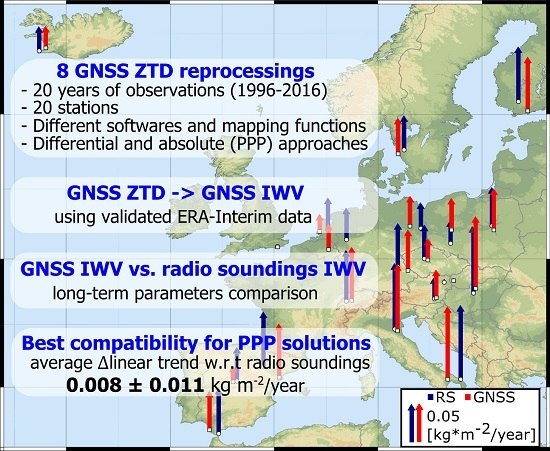