The Tropical Rainfall Measuring Mission (TRMM) was the first Earth Science mission dedicated to studying tropical and subtropical rainfall. Up until now, there is still limited knowledge on the accuracy of the version 7 research product TRMM 3B42-V7 despite having the advantage of a high temporal resolution and large spatial coverage over oceans and land. This is particularly the case in tropical regions in Asia. The objective of this study is therefore to analyze the performance of rainfall estimation from TRMM 3B42-V7 (henceforth TRMM) using rain gauge data in Malaysia, specifically from the Pahang river basin as a case study, and using a set of performance indicators/scores. The results suggest that the altitude of the region affects the performances of the scores. Root Mean Squared Error (RMSE) is lower mostly at a higher altitude and mid-altitude. The correlation coefficient (CC) generally shows a positive but weak relationship between the rain gauge measurements and TRMM (0 < CC < 0.4), while the Nash-Sutcliffe Efficiency (NSE) scores are low (NSE < 0.1). The Percent Bias (PBIAS) shows that TRMM tends to overestimate the rainfall measurement by 26.95% on average. The Probability of Detection (POD) and Threat Score (TS) demonstrate that more than half of the pixel-point pairs have values smaller than 0.7. However, the Probability of False Detection (POFD) and False Alarm Rate (FAR) show that most of the pixel-point gauges have values lower than 0.55. The seasonal analysis shows that TRMM overestimates during the wet season and underestimates during the dry season. The bias adjustment shows that Mean Bias Correction (MBC) improved the scores better than Double-Kernel Residual Smoothing (DS) and Residual Inverse Distance Weighting (RIDW). The large errors imply that TRMM may not be suitable for applications in environmental, water resources, and ecological studies without prior correction. View Full-Text
Keywords: TRMM; elevation; rainfall; Pahang TRMM; elevation; rainfall; Pahang
►▼ Show Figures 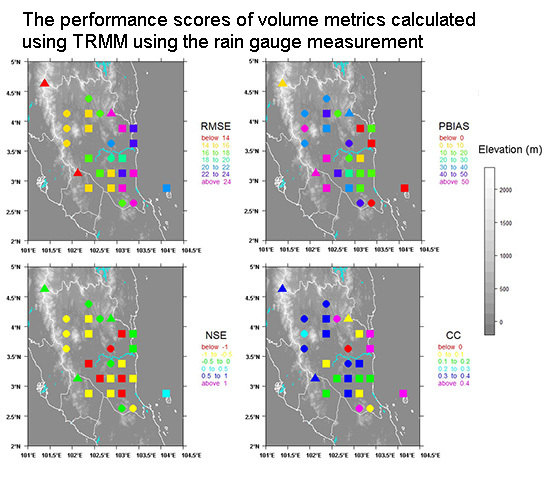