The emerging BeiDou navigation satellite system has contributed to global precise positioning and has recently moved toward space-borne applications. However, the contribution of BeiDou on LEO orbit determination applications is limited by the poor precision of the GEO satellite orbit and clock products. Current researches suggest that BeiDou GEO satellites should not be included in LEO precise orbit determination. Based on analyzing the characteristics of errors existing in BeiDou GEO orbit products, we propose a feasible method to mitigate the offsets in BeiDou GEO orbit errors by in-flight calibration of the systematic daily constant biases in the along-track and cross-track of BeiDou GEO satellites. The proposed method is investigated and validated using one entire month of onboard BDS data from the Chinese FY-3C satellite. The average daily RMS compared with the GPS-derived orbit indicates that our method achieves 6.2 cm three-dimensional precision. When compared to the solutions that disregard the GEO orbit errors scheme and roughly exclude the GEO scheme, the FY-3C orbit precision has been improved by 89.1% and 20.2%, respectively. The average daily RMS values of phase residuals are about one centimeter for solutions that exclude GEO and that estimate systematic biases in GEO orbits. The calibrated orbits of GEO with the decimeter level in along-track and cross-track can be reconstructed by correcting the orbit biases estimated in the FY-3C precise orbit determination. Statistics of the FY-3C orbit quality, observation residuals, and precision of the recovered GEO orbits demonstrate that calibration of daily orbit biases in GEO can improve the precision of LEO orbit determination and enhance the reliability of the solution. View Full-Text
Keywords: precise orbit determination; FY-3C; orbit biases; BeiDou; GEO precise orbit determination; FY-3C; orbit biases; BeiDou; GEO
►▼ Show Figures 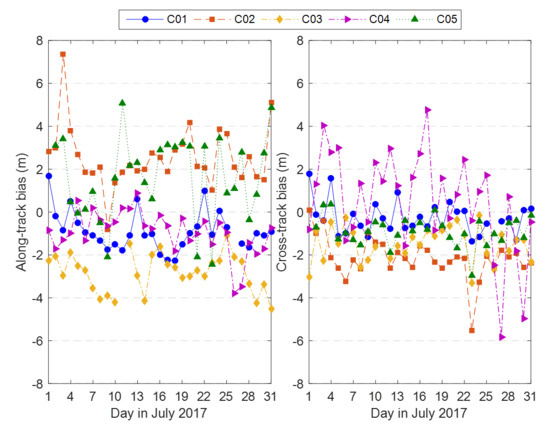